I dunno WTF is going on in the PC AH, but there’s an unreal parade of Endgame auctions started really low, just relentless in number.

Five or so of them are going for under 25K. Seems like it’s just about height. Yao and Tacko over 400K and almost nothing else over 100K, and most not even 50K.

anniversary set has got to be the biggest troll in 2k history. lost 600k in 2 days (locked in on wednesday when the cards were cheaper). ill buy endgame porzingis and then im done with this trahs ass game

You’re on PC? Or it’s crazy like this on console too? I just assumed that some PC farmers went ape-shit with pack openings.

I fucked up and didn’t sell off my MyTeam Anniversary LaMelo, which was going for as much as 300K+ a couple days ago.

Don’t think any of the EG choices from the rewards pack are worth even 50K right now.

prices on PS are the same as you described for PC, with Yao and Tacko slightly above 400k (and tons of them in the market) and all the rest BIN or close to, and many below 50k (Larry is well below 20k for example)

Crazy. I don’t understand what’s going on. Don’t have any use for these stupid clone trooper EG cards, but decided that last lineup was too short at 1-3, so did this:

Even on Playstation, it’s ridiculously easy to get every single EG. 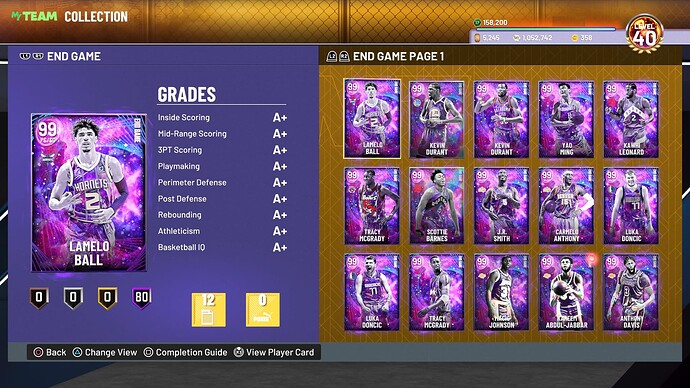 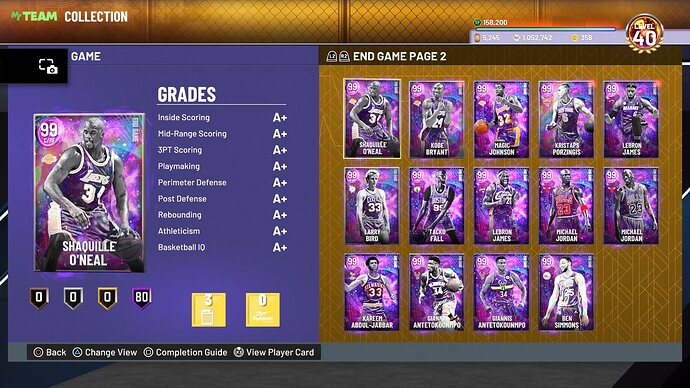 I even got a full Hologram EG lineup, just coz i could, lol… 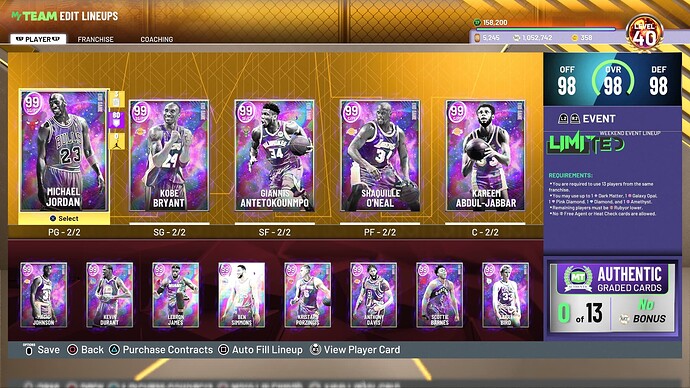 Xbox you can get a number of endgame cards under 20k. The only non endgame cards in my 13 player squad is Inv McGrady and Inv Tacko. Both I prefer their shots over their endgame equivalents.

Add that Inv cards are a steal. Got the McGrady with Diamond contract and 7 extra HOF badges for 19k.

you’ve got more than a million coins still…what even is left?

No idea. Maybe if there’s a season 9 or some random drop like an EG Manute or something like that i guess.

I think the game’s done in terms of new releases but could be wrong.

Do not see an EG Tacko. Hard to say you are finished until you get that…

Oh, and may i add that i also have the MT Anniversary collection rewards EG Giannis and EG Jordan, but i just bought the AH versions (which are the exact same cards, lol) just for the flex of it…

At this point, no reason to save MT. Planning on getting EG Tacko today just because even though I likely will prefer and keep my inv. All the D contracts I bought for 5-6k are now paying off. I doubt any reason to save for next season. Still holding onto my tokens in case something good is released.

I think there’s a misunderstanding, lol. I do have Tacko, i just don’t have a Holo Tacko. The lineup image is just my holo EG cards.

What’s the explanation for all this. Did 2K just suddenly make the drop rate on EG packs go up by a high multiple in the past X hours?

It’s the 25k VC guaranteed EG packs. We can only thank people who still buy VC in August (lmao) for this…

I’ve been wondering the same.

I’m wondering if it’s really fueled by regular players buying VC to buy these packs, or if it’s mostly VC farmers blowing out VC on these packs.

The volume was insane for a while. Like an average of an EG card auction ending every second.

The non gauranteed packs that cost 21k MT are also spitting out endgames with 40% odds.

So everybody is ripping packs either with VC or MT. I had a few streaks of 6 or 7 straight end games from the non gauranteed MT packs.