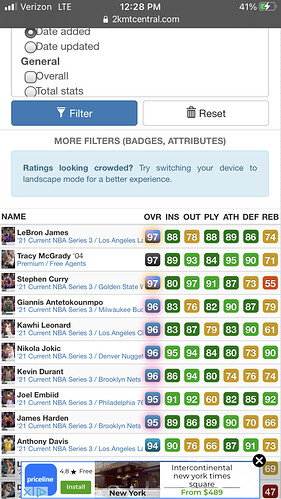 image750×1334 296 KB
They gotta do better
These cards were in the game Thursday, they had the whole weeeknd and they don’t have fan favorites
I don’t use this site at all, but I did once upon a time and one feature that they had that I always liked was the “similar” tab
It would be nice to be able to at least see that for some new cards

I USE 2kdb site lol

I do, but they don’t have the similar tab

What came up with the similar tab, same position cards with similar overall?

Similar attributes, they would give a overall number grade for that category, use that to compare cards of similar levels

As u see here, Opal curry from the series 3 set is more similar to diamond dame, based off the attributes, regardless of overall, this is something I used to use a lot in ‘18 and ‘19 when building my teams 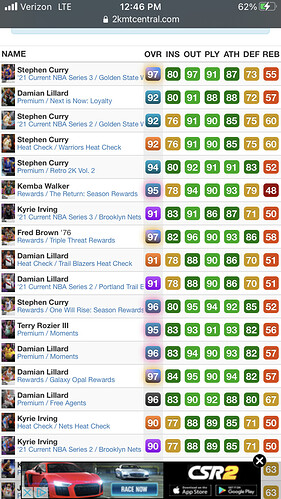 Imagine not using 2KDB.net and using this terrible site.

That symbol shall be known as: 2kmtcentrashcan

While 2KDB completely changed everything and is the best thing to ever happen to MyTeam, I do like a lot of the functionality of 2KMTC.

In addition, the “Similar” feature plus the ability to move cards around in the lineup creator are other positives about the site. It’s a shame that the admins simply gave up. It was my favorite website from 2K16-19.

I chatted with a mod and he said that he’s not entirely sure what’s going on in the lives of the admins, but he said that he’s busy now with work and a family and it’s hard to keep a site like 2kmtc running up like they used to. He still occasionally comes back but it’s around one time per month. He also told me that the other mod is busy with college so that was why he hasn’t been on in months.

2kmtcentral is a no mod shit hole I just left there. Never. Coming. Back.

I do know that tupac is an inactive mod/admin, who gets an unrealistic amount of hate for not being active on a dead site. Not sure if he owns the site, but I do love scrolling through the custom cards and seeing all the garbage that these 11 year olds are making. Here is an example: 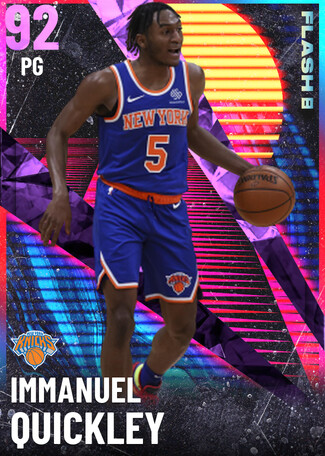 They are pretty funny.

Lol, I used 2kmtcentral for 2k20 cause troydan used it. In 2k21 I saw DBG using 2kDB and join up. This way better and organized.

I am a 2kmtcentral user for almost a year and the mods in there are getting lazier every day. They upload cards like few days after they’re in 2k but good sites like 2kDB does it before 2k releases cards which is good. Also, the 2kmtcentral community has become more and more toxic…