What y’all think I can get for this

I’m putting this to for the culture, you think I’ll get a good price for him 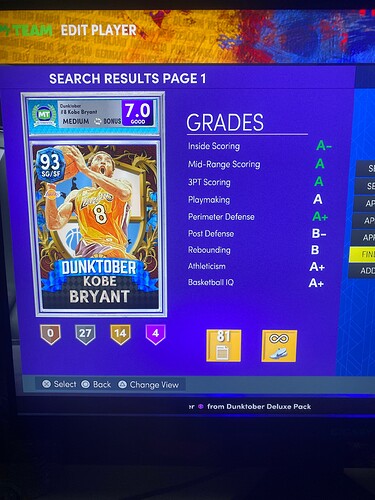 When do you think it’s good to sell Kareem?

It’s really only educated guesses from playing the last 5 years .I’d say unless a bundle of pink diamonds drop this week Kareem will go up in value for a while…pack odds are so bad this year once your 4-5 days into a program and people slow down on buying packs there will ne almost no new Kareems coming out

I’ve sold a fully badged (34 golds i guess) + hof acrobat added with 99 contracts for 255k, was expecting 300 at worst tbh. Shoe boost were damn good too. So get ready for a bad surprise as well.

Nothing hold value very long , i buy and sell straight after missions , only keep cheap players and my MT’s , only the MT’s are not dropping in value too fast now

Sorry if is obvious.

Mt’s never get old and stays at the same value.

I was going to sell vince now to get Kareem because i need good defense plus Kareem one of my favorite centers but am holding vince till he out of packs hoping for a price rise. But its risky because of friday content.you dont know what 2k have up for friday and they decide to release some more pink diamonds. That’s the only way price would drop vince and Kareem price and it’s another pd center or sg . If I sniped a card I hold it if I can see profit coming but If I got it for xp I sell as soon as I get done. Vince lack hotzones and that’s a big deal to me.

What does MT’s mean? Which type a card are they?

Don’t want to buy/sell anything I shouldn’t.

He mean My Team Points-MT. The in game currency.