What the hell dion (3rd suspension) 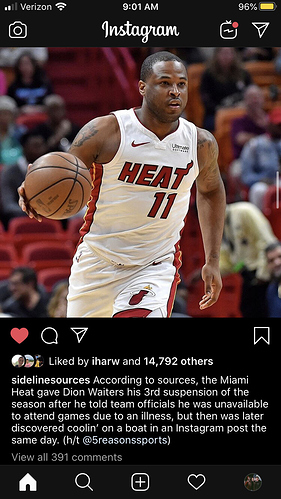 He’s trying to be traded.

He is trying to not be on 2k roster next year

He has 24 Million left on his deal. Unless the Heat pull a Stan Van Gundy and cut him like he did Josh Smith he will be on a roster.

Trade him for Derozan

I honestly think he mad they traded for jimmy, I remember when Kyrie put out that list of teams he wanted to go to when he was still in Cleveland, Miami was on it and I remember waiters saying that he could come there, but don’t expect to be the man, we already have the man

I think he needs to MAN up.
Trade him back to Cleveland

This guy needs to get traded to the Knicks lol

Getting major Jr Spliff vibes from this guy , kid really knows how to fumble a bag . But always thought he wanted to be a street dude over a baller.

Trade him back to Cleveland

You hush your mouth lol

Send him to G League

Surely the league has provisions that if you’re suspended a certain amount of times in a season for this kind of stuff that you can be waived without getting your remaining salary owed?

I mean if any of us called in sick and where seen on insta partying we’d get canned immediately. Dion is just taking Miami for a ride at this point. I’d be suprised if any team even considered him at this point, it’s not like he’s some godly talent.

I already know he will find his way to the knicks. Somehow they will trade young players and draft picks for him and he’ll play good for two seasons then they will sign him to a max and he will become old Steve Francis.

That sounds like such a Knicks thing to do