Just when I thought I’ve heard it all.

I believe it’s when Mercury’s magnetic poles are reversed. Supposed to change your “horoscope”.

Edit: when it rotates in the opposite direction as the Earth.

Man ppl are going wild over this shit, like their saying this is why their life is in shambles. Because of a fucking planet appearing to go backwards?

If you find anything related to it that guarantees easy money, @ me. 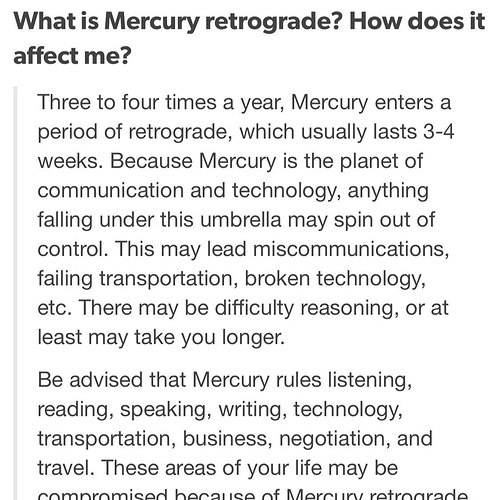 This isn’t what I found

As the Earth orbits we see different objects in the sky at different positions in our sky each night (if you look at the same time each night).

Mercury’s orbit around the sun is much shorter than Earth’s, and that difference causes the viewable retrograde.

Sounds like we all about to get hacked tf

I got important documents coming in the mail I need soon and a flight to catch on the 24th. Not to mention we’re trouble shooting electronics in class for the next 4 classes

So, that shit’s ongoing for 30% of the year.
I thought it was some phenomenon that occurs once in 50 years or so, lmao.

Also literally every planet (and everything else orbiting anything) will have retrograde as viewed from Earth, just with varying frequency.

So if any of these bodies are believed to “control” anything else you could just say some random thing is going to be all fucked up at any given time.

Jumpshots must also be ruled by my man, Mercury/Apollo. Only 3 more weeks and I’ll be able to shoot again!

It means, “I like to blame the chaos in my life on outside forces so I dont have to confront my bad patterns.”

Mercury being in retrograde is an optical illusion unlike horoscopes, which are total horseshit. If a guy says it, just laugh him off and let him keep blaming his bad choices on the sky. If a girl says it, run, because she’s insane, thinks the stars dictate her behavior, and has no sense of personal responsibility.

Go find the thread that danced around ancient civilizations and aliens… theres plenty of logic being passed out there!