Ultra-Cheap Recs for a Broke MF'er?

I got lucky and snagged a couple dumped at 2500.

This stupid game sucking me in while I watch myself, disgusted.

It does that. I think David Thompson is not great this year, but really like Jaylen Brown. Not sure if that was a big snipe or his market went down.

I want to like him more than I did. So since I’m a broke motherfucker, I put him back up at lowest price on AH, 14K.

I don’t know what it is. On paper, he’s awesome.

Probably me being dense.

I am still holding out for his price to drop a bit more. So I can snatch it up. He may turn out to be a keeper instead of a rental but I don’t know.

Weird, not flexing, but okay:

Just some of what I think are the more notable auctionable cards I have let myself hold on to. Otherwise, I have 105-110K or so in MT. And not including the value of the DM Glenn Robinson I’m renting for his XP.

So I think the only card I have worth over 20K is the DM Draymond. And as much as I like him, I’ll try to figure out when is a good time to sell him since there is surely going to be a Draymond that can play Center. Though who knows if I’ll be able to afford it.

Also have a bunch of the Reward cards that have been available the last couple months and like a bunch of them a lot: DM’s Jerry Sloan, Marcus Smart, Bill Laimbeer, and Richard Dumas. PD’s DeJounte and Halliburton. Hardly have even played a bunch of cards, because I’ve just been chasing Giddey and the Playoff Moments rewards.

That’s really close to what I currently have. Sikma and Wiseman down low has been a stifling duo.

if u still have this account either use this as an alt account for locker codes and mt farm, or have fun with this if ur main is too op

Oh my main is def U.P. Most of what I have is worth less than 30K MT. Almost nothing worth over 50K. But JUST picked up an Invincible Klay for my Warriors team. For wont of no real goal in the game, I might grind for Invincible Curry and get the GO Wiggins and GO Kuminga along the way.

I think these might be the most valuable cards I have. I know, I know. Don’t laugh. 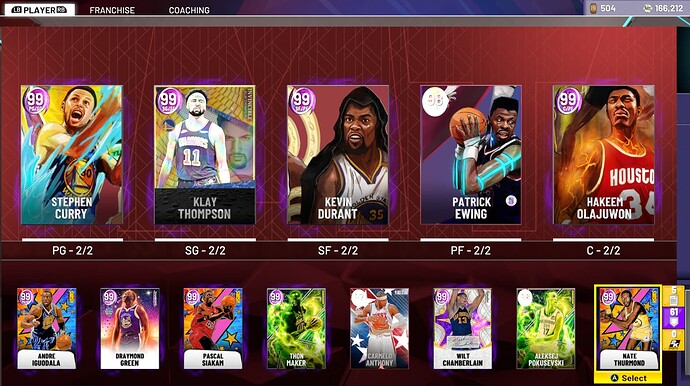 And I just got a stupid-looking Hero Kevin Durant to add to my Warriors lineup. He can come off the bench. Reigning champs start.