At the rate they’re dropping all these cards they’re going to need to update these trophy case rewards.

Donovan Mitchell and this PD Ja coming out already just as good if not better then Westbrook, Drose for PGs.

All the Trophy Case rewards bout to be out dated in 2 weeks lol. Hopefully they update them or something.

i still think the badges put the trophy cards over the top. 10 hof badges with slots to add any badge in the game is better than 1-5 hof badges with limitations on what you can add.

They’re all bad and absolutely not worth the grind. I made carbon copies of 15 of them and only Korver is ok because of his quick release. Hayward is ok-ish, but when he’s wide open his release becomes slow too. Wanted to go for Stevie Franchise, but his jumper is borderline unuseable

Diamond Mitchell is much better. Don’t waste your time guys unless they update them.

James Worthy is great. He dominates inside and has a good jumper. Defensively he can use clamps if you are willing to buy it.

Surely D Rose is okay? How’s Big Z? Was thinking of going for him next. I mean I’m not gonna grind for these cards like crazy but eventually they’re the only things to use those trophy cards on. And maybe Julius is alright?

I made his carbon copy too. His release is too slow for me. But I’m shooting a lot of wide open shots of off plays, so keep that in mind.

Mourning is good if you don’t need a good jumper on a center.

I can green his jumper. He doesn’t have the fastest jumper, but for a PF/SF in September it is a very good release. His biggest strength is going to be attacking and scoring in the paint. I don’t think anybody has blocked his dunk yet. He can post up basically any SF if you play him there. Defensively he is good. He can basically switch any screen.

I didn’t make these 3. Rose has a decent release from what I know but his behind the back is terrible so I didn’t even bother making his copy. I made Francis, Korver, Hayward, Mourning, Worthy, McHale, Jennings, Lin, Finley, Manu and I think Ingram. So it’s 11, not 15, my bad. Will make few more later today.

I’ll probably get him some time during this week. He should be usable for a few weeks to a month after that.

how did you do it all so quickly?

I made carbon copies of those cards outside of myteam. Same attributes, same animations, same badges.

10 games away from my Centrepiece and Arvydis Sabonis. Went the Clutch Offline route

I gotta question for yall…i got my centerpiece and when i was getting all my things from the token market i accidentally got the elite franchise accolade for the east. Does anyone know how i can get another elite franchise accolade? I tried to reach out to 2ksupport and havent heard nothing back of course. I just really hope i dont have to get lucky and get it out of a pack because i already got my centerpiece and im already burnt out on the game lol

The best card of those rewards is Kyle Korver and it’s not even close. He has by far the quickest release in the game right now, and that’s enough to make him the best trophy case reward imo. It really is a game changer at this stage of the game. After him it would be Mourning (slow but greenable release, and his speed, defense and inside scoring make the difference), Worthy and Hayward. The rest is at best meh (D-Rose is obviously good, I just didn’t make him).

I can agree that RJ’s release is terrible. I feel bad bc i put HOF limitless on him fml.

I know. I am forcing myself to figure out how to time his shot bc as a slasher and defender he is great

Welcome to the team Sabonis 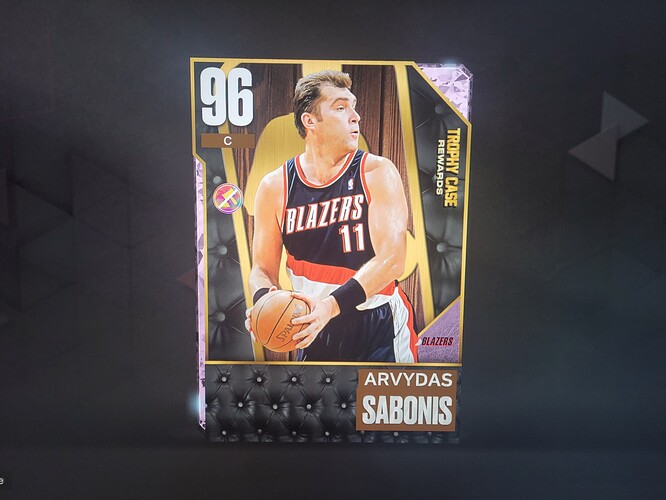 My friend is a hunter and he’s gone hunting once with this man. Dude’s a giant.