Top 20 players of all time by positions

Ok, so while we are waiting for 2k22 I have tried to make best 20 players at each postion.

Note: this is only my opinion, I have using factors like time when they played, team and individual accomplishments and very important their influence for the game.

This is the list for this moment so active players can and some will be fir sure higher ranked by rhe time they retire, like Giannis who will be one of the top PF if he already isn’t. Players like Kyrie, Lillard, Klay, Mitchell, Kawhi, PG13, Jokic, Embiid etc… 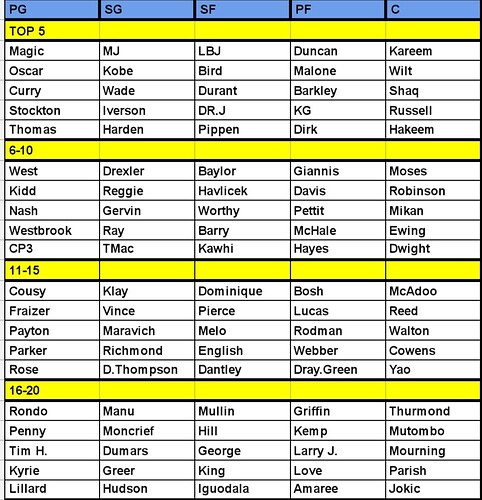 I haven’t even looked at the other positions yet, but guys like Nate Archibald, Chauncey Billups, and Allen Iverson have to be on the PG list. No way I would have Rondo and Kyrie on there.

Edit: I see you have Iverson on the SG list.

Allen Iverson was listed as a SG in his prime.

No way Iggy makes this list for me. He was an important piece to championship teams, but that’s not best of all time material. Robert Horry was a 7 time champion as a role player, but I’m not sure he even belongs on the list. Billy Cunningham should be there though. 3 time First Team All NBA and 1 2nd team All NBA.

Giannis might need to be up in the top 5 after winning the finals this year. Lots of awards with more to come. Barkley and Malone were good in their own right but never put the team on their back and brought them the whole thang.

And jokic might be recency bias for me but how many centers have MVP on there?

Whenever i see debates like this, first thing that comes to mind is “define best/top/greatest”.

I would say combo of all…

westbrook over cousy? pretty sure cousy was the point guard that inspired and created an example as to what a point guard’s role is.

Rose, Irving, Lillard, Blake, Draymond, Grant Hill, and Rondo should NOT be on this list

Not a real list scal isn’t on here highly inaccurate

Also, wherever Bill is, Wilt should be under him. Bill dominated him during his whole time in the East. Cousy and Penny are overrated, Chris Paul is underrated, Vince>Tmac, Reggie wayyy too high, Barkley too high, Pippen>Dr J, Yao too high, Mutombo too low, and honestly I’d put Ben Wallace over Jokic all time, at least for now.

Man while I could pick apart a few things for now I’ll just good shit putting it together and sharing it with us.

Any list is ripe with potential for disagreement, even outrage, but it’s a list that I think shows thoughtfulness.

Sometimes, your arguments, perception, or appreciation of the list depends on your “age” or your personal experience on that era or different eras of basketball. Like those people who are already following basketball in the 80’s-90’s or earlier, might have a better appreciation of Jordan’s career compared to those who was born in 2000’s onwards. I really MJ, and i’m glad Kobe is pretty much similar to him so that younger generations can relate to his mentality and the way he plays. So yeah, different era’s, rules, generations. So it boils down to preference and personal opinion at this point. But i like the list.

Bruh, agree to disagree. We all know the Finals MVP was a joke and should have been Steph, but regardless of that, people elevate Iggy because he’s current. If you go back to the 70s and 80s you can find all kinds of players who were the 4th or 5th best player on title teams that stack up to Iggy. I don’t see Paul Westphal on this list, but he won a title, was 1st team All NBA 3 times (2nd team once), and a 5 time All Star. I’m just not putting someone on an all time list that made 1 All Star game and never made 1st, 2nd, or 3rd team All NBA.

Tbh I have tried to make top 10, didn’t work… Top 15 didn’t work… And finally top 20. We will always have disagreements, everybody has different thoughts… I just wanted to try to make some objective… Universal list… Like best out of the best at each position, maybe Cousy deserve to be higher than Nash, maybe younger generations don’t think DR.J deserve to be that high…and such things… But I still think I manage to create some good stuff. Sometimes I thing I should include maybe Cunningham or Jones or Dandridge… But… Who to cut off…