Anyone else super disappointed with this card? He looks amazing on paper but feels so slow

Well I’m 2 wins down through unlimited and I’ve played 6 games. Makes me want to stop playing

. What is wrong with him? If only problem is speed, just give him a shoe

I actually liked his speed. I’ll tell you what I hate and that’s Ben Simmons. He seems to walk for me. I have to glitch to be fast. Now when you glitch he flies. I think he has best animations in my team.

Warren I like. I think his jumpers wet. I had take and missed a few because of stupid steady since I’m on current. I think he’s above average on defense. It’s really nice playing him at the 2. I think he’s worth it if you don’t have to sweat too much. I wouldn’t play 40 games for him. I had to play 14…I lost one and on a rage quit by a guy in 2nd I got error coded

I’m going for him. Thank you for the insight

You should finish it and get him especially since you’re that close and depending on your squad you have now but his dribble animations and just fluidity of his movement seems slow for me. Im on next gen. I’m curious of other people’s experience with him

Out of all the cards, TJ was probably the least excited I was. Christian Wood was def. #1 for me, but for some reason I didn’t think TJ’s on paper stats would transfer on court.

I don’t even see him being in the same realm of the PG13, Jimmy Butler, Vince Carter’s… but hell, he’s free lol. TJ just seems decent at best when I’ve played him. Played him twice in TTO en route to Buddy, he didn’t impress me at all but could have been my opponent.

I’m not a Unlimited guy, so IDK if I will go for him or not. I barely play 12 games all season lol. But If they switched Christian Wood and TJ I most definitely would go for Wood in MTU.

He’s a nice card but I don’t like how slow his jumper is compared to Covington’s if it is even slower ? But I remember trying to use warrens diamond earlier to get xp and I couldn’t shoot at all, just played a game with Elgin and I prefer him

Jump shot too slow for me. Also feels a bit slow moving around. Maybe the dribble style?

Definitely doesn’t make the squad over Ray, Elgin, Kawhi and the like.

Wait. Isn’t his jumper the same as PD Covington? That is straight cash for me. (Current)

It really is amazing how subjective jumper opinions in the community are. Some of these bases are really love/hate.

idk if its me, the first thing i did after grabbing him was to test him out in a ttonline game as a main ball handler, his jumper looks okay but if you try to initiate with him it is too slow…maybe he is good as a cone

imo butler and baylor are both better options at the 2

I ain’t try him out yet I’m give him a run. I’m falling in love with Jimmy Butler card. At first I wasn’t hyped about him but the more I use the more I like him.

He’s amazing for me on current. prolly my best scorer

Not a fan of the release on next. Prefer Ray until we get the next Kawhi

Just had 3 people with full dark matter lineups ragequit in 30 mins. Up to 7 wins… only 5 to go

I’m at 9 wins, should of been 10, but I got an error coded, trying to do the stuff for Mikan at the same time, was at 42 points with PD Magic and that punk quit in the beginning of the 4th, he was down by like 30

Moments away from win 11. Not been a huge sweat fest surprisingly. I can smell TJ Warren

I decided to go for TJ just for the fun of it.

I’m a TTO/Limited guy when it comes to online play, so getting into the MTU streets is different, but overall it’s not bad.

7 wins In so far…guess I made it this far might as well finish it. Might try to get to 8 wins and call it a night. But after this weekend I have definitely played enough MTU for the rest of the season and probably next season as well…I salute the hell out of y’all that can play MTU everyday. Also on Next Gen every game that I’ve won outside of 1 or 2 has been sweaty.

I know some people like the competition, but it’s times like these where I wish I booted up against a dude just starting the game. 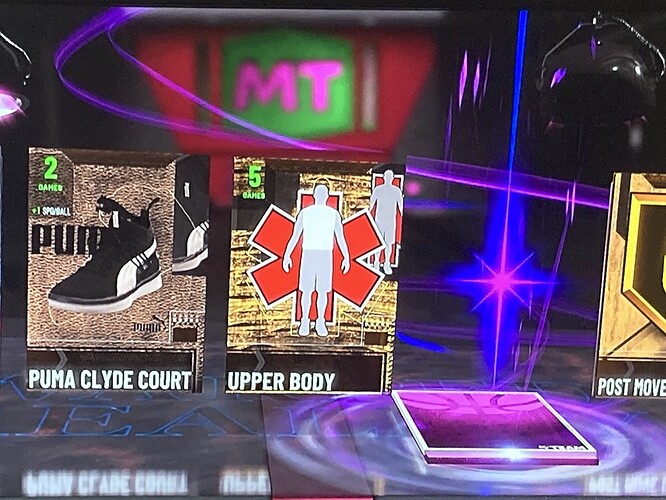