Sorry @mfawcett , I beat you to it. Guys, show off your lineups in season 2!

Just got Larry Johnson and next up is Rip Hamilton for me. Is LJ usable at PF as an undersized 4?

Hoping to get Westbrook soon at PG. Kyrie is definitely the most fun player to play with though

Lol, I haven’t even played season 2 yet. Been working this weekend and went out for dinner afterwards. Going to get a few games in tonight when I get home, take a look around at agendas and XP and work out the best way to stack everything. On a 25 hour break after work today, 2 night shifts then 5 days off. Then I’ll hopefully be around level 30/32 and looking at a few more PD Trophy Players with Worthy and Peja.

Yeah, Larry isn’t too bad at PF and Pippen at SF, But I’ve now swung Larry to SF off the bench and running Kemp at PF for that extra height and rebounding. Teams looking good mate. 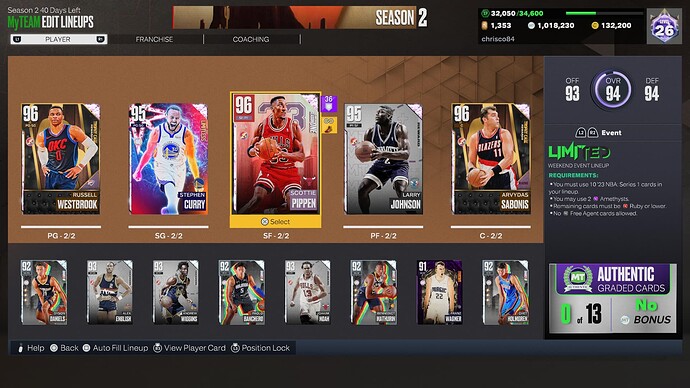 Should have next CP today or tomorrow from unlimited.
Either Wally or Hayward. Most likely Wally and move Steph to the bench.
Is Hayward good enough to run at PF? I actually like Larry there, he is like Zion. Pippen way better at the 3.

I’ll also have enough tokens from getting the unlimited CP I can buy a 1500 one and then one CP away from Clyde.
Don’t know if I want to blow 1500 tokens just yet as I’ll still be 1 away from Clyde.

Going to have way too much at the SG/SF position and not enough at the PF, so next I’ll for Worthy to fill that.

Welcome to the team James Worthy. 1200 Tokens, million MT and should be good to get a few more Centrepieces this season and hopefully AD. Should have another 2 more Exchanges this afternoon for another Limited player. Maybe Iggy??? Need a good back-up PG.

You probably already picked someone but Donovan Mitchell is a no-brainer if you need a PG and don’t have him yet. He’s the card I’m most comfortable with on my team, along with Pippen.

I’m rocking with this rn:

With the next centerpiece, gonna pick up either Jermaine or Rip. 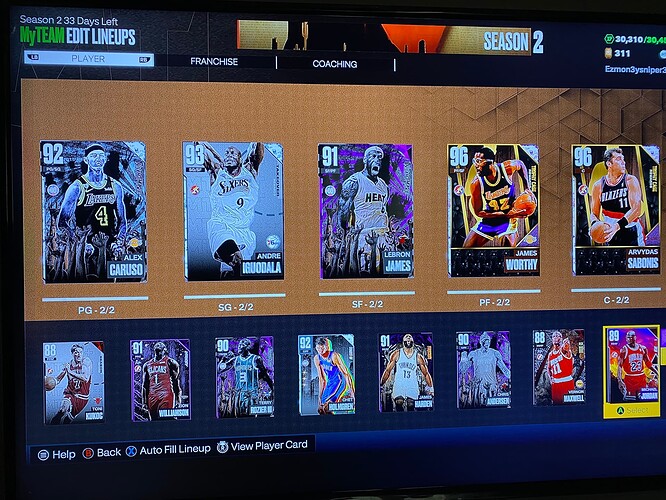 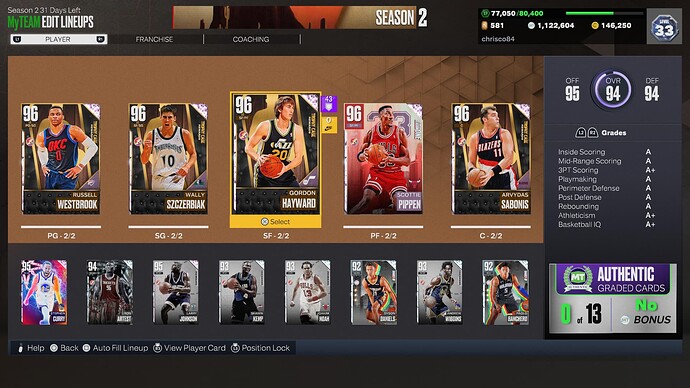 Got Kemp from the option pack, took Hayward (wow he is underrated!!!) and Artest from a deluxe exchange pack.

Kept it all OO / rewards with only using VC on Paolo and Daniel’s (from preorder VC). Pulled Curry from unlimited 20 box.

Really happy with this team. 1.2 million, 580 tokens. I feel I’m just hoarding MT now as the reward players are great.

I’ll get my next centrepiece in the next few days which gives me Dikembe (Noah to bench/out) and Clyde (Wally to bench, Wiggins out)

The grind is real but it is rewarding if you manage your time. I know I’ll get Booker but not rushing after last season the XP given at the end.

Pretty much just hoping for a Penny soon (Magic fan) and I might make a big purchase but Dyson holds down the ‘big’ PG spot fine.

Crazy, just got my next Centrepiece with Peja, but he just squeezes in as my backup SF. Exchanged 1500 Tokens for him. Should get AD this season prety easy now from TTO and Clutch Offline. 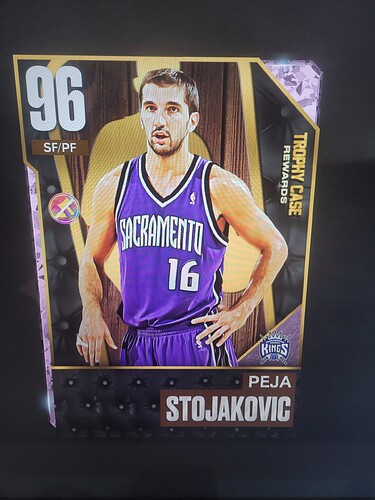 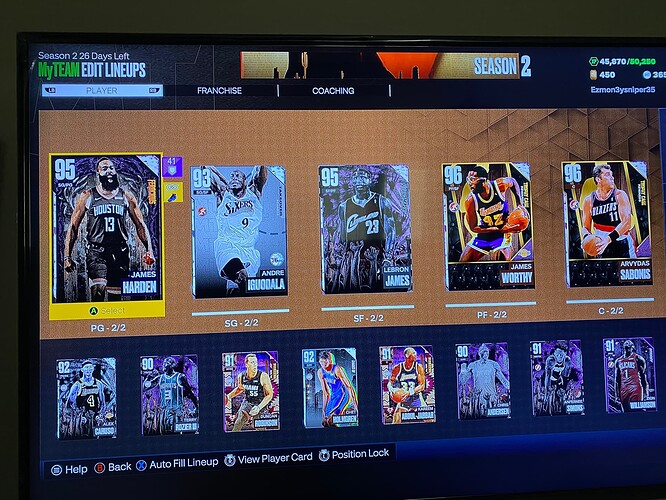 Welcome to the team Devin Booker

Feel good with this squad won’t be making changes for a while I don’t think. MVP of team is Hakeem

Was there something wrong with the servers last few hours and the Auction House? Put up my Ray Allen with an extra HOF Badge I rented for the XP and he only sold for 100k!!! Paid 240 or so 4 and a half hours beforehand

Ouch, I saw gaps in cards when looking before, they were either ending in 2-5 mins or 2 hours, nothing in-between, it was weird. Didn’t seem like the servers went down though, just some random ‘glitch’ I guess (for lack of a better term).

I’m pretty much staying away from any card I want to flip that is above BIN for while with how the servers have been. Too many people getting burnt.

Just got Booker. Does everyone find him as bad as we do? Worse defensive player ever and it feels like they messed up his shot. Perhaps need to give him a chance, but for now I would even prefer using amylest Dumars over him as SG.

Not that I can afford him