Just realised, there’s no thread yet for teams you’re running. Guess I’ll start. Just need to fill that SG position. Level 35 and few thousand away from 36 and last ascension board. Hopefully Pippen isn’t too far away for me. Can’t wait.

Mark Williams really that good? I got Stockton as well but he’s so small and can’t dunk, I’m still running Ja.

Stockton is a sniper for me I love him. Only guy I can 3 hunt with efficiently 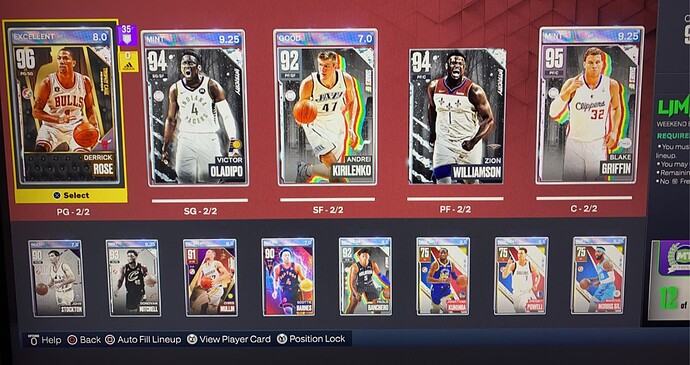 I’m enjoying him at Diamond. 7 foot, can run and move pretty good this early on and great defence. He’d be starting if I didn’t have Sabonis. Just need a good SG. Mullin will hold it down for now. Have around 100k to play with. Trying not to hold onto too many auctionable players, otherwise I’d be running Danny Green.

Pulled Scottie from a PS plus pack and Williams from the Shades of challenge. Only purchased Paolo (I’m a Magic fan) with VC earned from Career mode. Prefer to use only non auctionable cards this early in the year and build MT. Mark Jackson and Smits only non OO cards but got both early for under 1K and also Holo for agendas.

SG is the big hole for me, not many free cards to fill it so far. Didn’t have the time to grind D Mitch.

Anyone have any recommendations for token SG’s?

Good to know. I have him at amy. Probably gonna evo him offline then.

I’m personally burning my tokens to get Noah. He seems like a usable C for the time being. So no need to get Ben or DJ. Don’t think there are any very good SG’s in token market. I’ve used DeRozan and Lavine duo offline. DeRozan’s release is very good. His better cards will probably be nice. So maybe they’re an option? I suggest getting Green. I got him for 15k and his price has actually risen a bit. You could use him a little and sell back without a loss if you find one for cheap. I run Dell Curry at SG off the bench because his release is cash and he’s usable on D. I’ve forced some quits in Unlimited pulling up with him from deep on a fast break. But he’s around 10k MT I think so not cheap. I have him unauctionable.

Noah’s a beast on the boards for me. He just seems to grab everything. As much as I enjoy Sabonis’ height, the offset is he’s very slow and sluggish. No worse than Smits but that speed I can see being a liability very quickly. No point even putting speed, Acceleration or Lateral Quickness boosts on him, they’ll still be in the 50’s where it still does nothing.

See my post above about my thoughts on Sabonis mate

Depending what modes you like, may be worth not evolving him. I have him as a Ruby and all the requirements to evolve him up but holding off. He is by far the best Ruby center. For now I am waiting until Limited this weekend and maybe next. Meantime he is an offline demon at center.
I am doing the same with Ivey as a Ruby PG.

If Limited requires a Ruby, I’ll grab a Ruby ftom AH and keep the Diamond in the AH in holding and just use the Ruby for the meantime than sell that on. Easier for me personally.

finished the iggy grind last night. was gonna go with agbaji but he just refuses to get steals for me, even when i poke it loose he won’t pick it up so here we are.
gonna push heavy for scottie this weekend so sochan will be on the bench by next week and i’ll probably sell ivey because mullin is too cash to get rid of 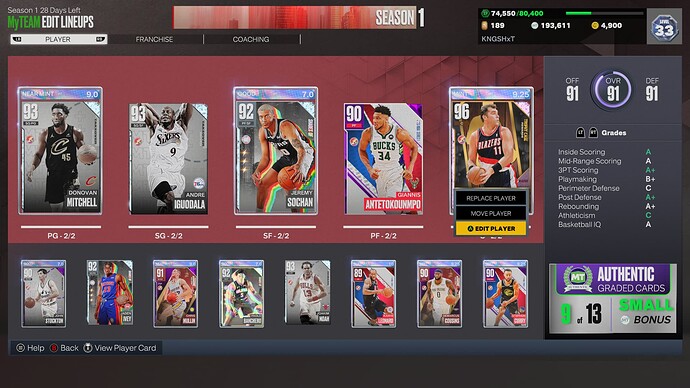 How are you finding Sabonis so far? I’ve put my thoughts above, great to have, but just that slowness offsets his other attributes I’m finding. Even putting speed, acceleration boosts aren’t going to help when they’re already so low. Damn, also, is Giannis that good you find over Banchero?

I love Sabonis. I play most of my offense through him. He is slow, but nobody can guard him in the post and his shot is super green for me. I gave him HOF QFS and it’s great on him. He’s also a hell of a passer. Paolo was my starter until he kept getting bullied by every Giannis. Decided if I couldn’t beat them I’d join them. With the shoe and coach + Floor general he’s up close to an 80 3 ball. Also gave him claymore and C&S. Most people assume he can be left open when I 5-out so it’s easy greens all day especially in corners

Great idea on the HOF badge, but it’s far too early for myself to be wasting HOF badges on cards that will be outdated in a month’s time. I know I can pick up more later, but I’d rather save them now and throw on Gold badges until I can throw them on a card I can auction off and get some decent MT returns for:)

I have the option pack from limited in my packs just waiting for a card to slap limitless on tomorrow. I’m gonna make a killing so I felt I could waste one of Sabonis.