Since the start of this event the AH has been flooded with gold badges and its only going to get worse. As a badge collector/flipper I’ve gotten to the point where I have maxed out multiple badges in my inventory and need a place to possibly sell these stacks since it’s impossible to on the AH. I’ll give you a recent example.

I accidently sent a stack of 20 showtime badges to the AH for 12 hours (ending at mid day) for a 4k bid. As you can imagine I was FREAKING OUT considering that was roughly 40k in badges. At the time the AH price of a showtime badge was around 2k. To my surprise …no one bought the stack meaning that 0 people out of god knows how many were looking at the badges to see they were stacked, assuming each one is the exact same…and why wouldn’t you? I would if I didn’t know about 20X stacks (not that I’ve seen on in the AH and now I know why).

2k Gives no indication that they are a stack, they look like a generic badge. How is anyone supposed to know that the are actually that badge X20! Anwyays I figure this could help the community out as I hope it helps me out. The Idea of this group is to post Badges that you have stacked (20X) and are lookign to sell to someone who can also profit on those badges aka “Wholesale Pricing” or as those history channel junk hunting dads say “bundling”.

I hope this helps and I hope you guys blow it up because I know there are a lot of people who are newer and could defiantly use a 25k investment to make 40k with the only downside of time.

I figure you can use any format you’d like for my first post I will go with:

Yes this is real haha. Feel free to post as much as you’d like. Hopefully this help!!!

Could you pictures looking at the AH all of a sudden you it said 20X Showtime … 4kMT? The main problem it would require you to scan the badge AH ahha. So yea you absolutely can. I will even go ahead and sell you 20X rebound chasers if you’d like I have a stack.

Either way thank you for the info. That goes right with my thinking. Most people have no idea because unlike contracts or injury cards you usually apply those badges and never get close to 20.

Pretty sure you can’t tell the contract stacks apart this year either.

It’s so fucked up, I don’t get why they can’t just put something … legit anything to distinguish he’s single from a 20 stack. I purposefully have to hike my price higher than maybe I would just so that someone looks at it and hopefully sees that it’s X 20 lol idk how that makes sense but it’s what has to be done.

Just another thing they took away. You used to be able to tell them apart up until last year, I think.

Yea you could, it like had a solid yellow frame I thinks. Honestly it’s not like they couldn’t fix this tomorrow or later this afternoon it’s just no one is talking about to … because they don’t know it exists lol

Could You imagine seeing 20 showtime badges two weeks ago for 4K? Could be the best snipe ever hahaha

You can, but it’s a really small detail, I’ll take a picture later

There’s a small gray line above the badge. And all you have to do is press L3 and it tells you if it’s one or 20 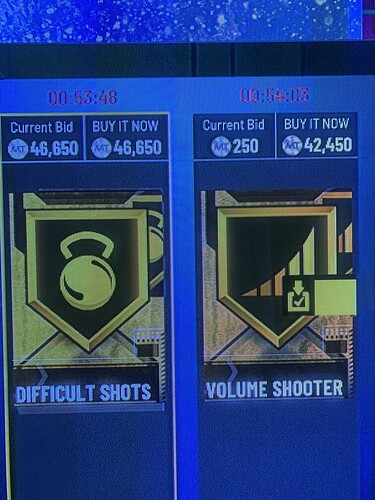 EDIT: there’s grey on the bottom too.

What a terrible design. No wonder people can differentiate the two. It seems 2k has hired someone who’s not very good at designing this year. Idk what happened but the overall drop off compared to last year is huge. Look at the opal cards last year compared to this year. Cards looked tasty, expensive, much more premium-looking than diamonds or PD’s. This year they’re all the same, the opals are just orange in colour. These cards have MyNBA2k design.

I have no idea how I never noticed this. Good looks.

What a terrible design. No wonder people can differentiate the two. It seems 2k has hired someone who’s not very good at designing this year.

It’s bizarre and bad for the players in the sense of increasing possibility of someone accidentally spending a ton too much for a single badge, thinking it’s a stack.

In prior years, the graphic difference was more pronounced…and, even then, it was still too subtle.

You can also click R3 on PS to “View Card Details” if you’re not sure. It will tell you the quantity. Not sure the button for Xbox. 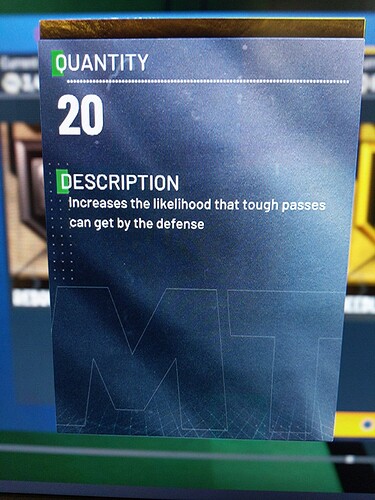 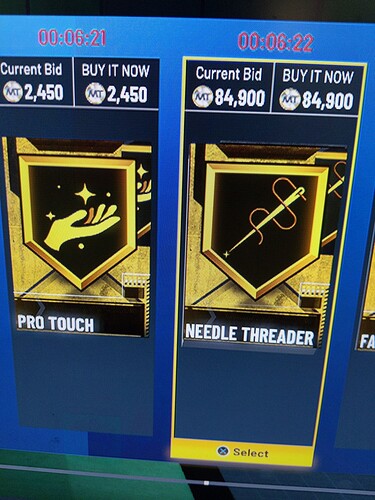 That’s still a pain in the ass

I agree. I didn’t even realize they had grey on the bottom until it was pointed out above. I’ve been looking for the little sliver on the top all this time.

I didn’t either until you pointed it out

I have a stack of gold rebound chasers if someone is looking to make some slow profit off Embid. Willing to sell for under 30k or 1.5k per badge. HMU if interested

I get hes around 1000k “sometimes” and yes he does get posted around that every few hours but they are generally around 1.3-1.5k and thats with these season of giving gold badge packs. Now that Joel has to have it added you know that badge will rise in price slowly. That said you are right and I probably went a bit to high on my price. I will adjust it accordingly and say 20k - worst case you sell them for 1k (which you wont) and end up losing 1k hahah pretty safe investment considering ppl buy stacks of crappy ruby cards to make 100MT profit each hahah