This hurts my soul

Should I sell wade for Caruso??

What’s the prices of both?

You played with Alex yet?

Depends if you’re a dribbler if not then get Caruso

No, but I saw the attributes. He should be OP.

From a gaming perspective, he could very well be better. But just seeing Caruso where Wade was, it’s a spiritual bologna sandwich

And, unlike Bol Bol, he actually is a fan favorite. (And he actually played in the league.) So, it’s a great card for Lakers fans…

Yeah but hes still a vastly overrated rotation player who shouldnt get an elite card I cant believe they have guys like shawn kemp and gary Payton who dont even have good cards and they drop crap like these ff cards.

What if I sell wade and Westbrook for oscar?

I just caught that @Shoko lol

Oscar is big and strong and you can use him like TMac, Durant etc…has a post game also.

Can’t speak for others, but I’ve moved PD Wade to the bench and pushed Alex Caruso into a starter. Opal Caruso plays bigger, He Flys… He has dunk animations that basically suck the opponent into getting postered. His shooting release is much more consistent than Wade’s imo. Depends on your playstyle, but this guy is a flat out beast. Averaging 12.3 ppg through 4 TTO games and he had 15 in the 1st quarter of an MTU game that my opponent raged quit on. 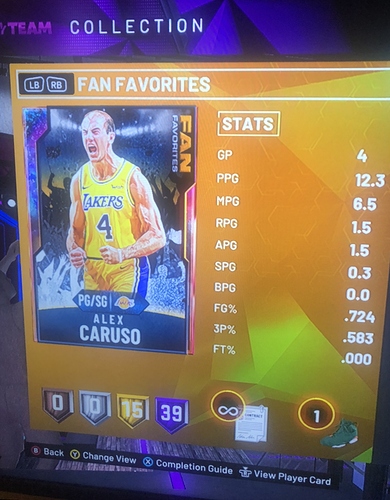 Wade. Wade has lasting value being part of a set. Alex is just average