It does seem like every decision 2K made for this season has gone wrong. I like doing many of the offline agendas/challenges, but they have none of that. I have no idea who came up with the new trophy agendas, but they should be fired. The cards are not even very good anymore and they took away the fun in just collecting them. Glad I just got DM Duncan before this season started, but honestly not sure he should be on my top 13 player team (and my team is both cheap with only BIN players and not that great). What I loved that they did earlier was Evos and Duos. No idea why they have not done that yet this season. It would be the one way to have us interested in the trophy players again as well.

I think we get a godly PG this week. Maybe Ben

How do we change it though? Instead of all of us just complaining about it?

I actually think filling in the questionnaire that 2K has at the end of the season can help. I do not think it is 2K not putting any effort in trying to make a better game, it is just that they are failing at it. For example - Last year everyone complained that by the time the reward for Limited was available, it was already outdated. They then tried to have voting done for an option at the end of the year, but everyone hated that. They then did an option pack, but always using players no one cared about.
This year that tried a new approach with an option pack of the Takeover players. For the first season, the idea was not horrible as some of the players were fairly good. Problem is the Takeover players sucked the second season and we complained again. This season they did sort of listen and changed to a 20 pack set of cards. The only problem was that they did not understand that it was not the final prize we were complaining about specifically, it was that the Takeover cards kept getting worse and then the choices were bad. If they had much better cards (like the first season) and then had an option pack again, we would all be happy.
Of course 2K has different interests than what we have. We want great free cards as prizes for fun, but not tedious, agendas. 2K wants to make a lot of money. They need us to be happy playing the game to accomplish this, but they want us not to be too happy with the free stuff so that we are willing to put out cash to buy packs.
We just have to remember this when we send them our ideas. I will say that I am happy that they put out now evo agendas for older cards today. I prefer that over new packs. I just wish these latest takeover cards did not have such long agendas that come to us on a daily schedule. No way I have the time to do those, especially the ones with online dunks.

Moments Jrue looks good for my style of play

I agree this can’t possibly be an easy task appealing to so many different kinds of gamers, but there are definitely things that they are changing that they already had figured out in past 2Ks or earlier in the year.

Why remove offline agendas for trophy case centerpieces? The only people still interested in trophy case players are mostly offline players because anybody who plays online knows the majority of them are either garbage or have better counterparts in the AH and they aren’t even super expensive. Luol Deng and Ricky Davis are better than any wings in the trophy case and are BIN. I think to anybody thinking critically, trophy cases should become easier to get over time as cards lose their advantage, not harder.

Why did they reduce most promo sets to 8 player cards where 3 of them are the same guy? Who asked for that? Part of the fun of the mode was getting a card, having fun with it and then being excited to upgrade when they get a new version. We had the base Steph, the elite shooter Steph, and a Steph that could dunk and play D all before January. It used to take until March before we got a Curry like this. One of the best parts of MyTeam, for any non-whales, has always been finding a lower tier guy in the collection who absolutely hoops. Ruby Smart, Sapphire Reddish, etc. Last year Series 1 Ja with the Jaren duo was my Limited PG all year. We don’t have anything like that this year.

Moments cards are abysmal. I don’t understand the issue. The system has always been guys having career nights get moments cards, usually not the big names because they might have 3 career nights in a month, but with the explosions we’ve had this year, we shouldn’t only have 12. Siakam, Garland, Shai, Haliburton, have all had their career highs this year and don’t have over a diamond. These guys aren’t even pack movers, they should have moments cards easily. These should be a perfect way for NMS players to build competitive teams, yet 4 months after release there aren’t even enough to fill a line-up.

Where are the new rewards? The best draft mode has ever been was when was when they had exclusive rewards. I think 2K21 was that PD Glenn Robinson. Everybody’s only complaint was he was too hard to get even with max wins. I think logically the solution would be, max wins gets you enough picks to clear the board so if you can finish the mode you got him. Instead, fast forward to today and the reward is a card that’s a season old and a BIN or was a free takeover? Why? Why do we get these boring theme collections with players that are only used for agendas or lock ins. Some of these guys, especially the retro unknowns, could just be a little more souped up and be the cards we get on the way to level 40.

Maybe I’m in the minority, but I play a lot of MyTeam, I watch a lot of MyTeam content, follow a lot of Myteam guys on twitter, I had never seen anybody complaining that Unlimited was too hard. I heard mashing was an issue, I heard defense as a whole wasn’t great, glitches, etc. Who the hell asked for the difficulty to be so low that heavily contested whites are dropping?

They somehow made the mode more grindy while simultaneously making the grind less rewarding.

Not exactly a comment to what you wrote, I agree with almost everything. But I’d point out that there are really no player lock-ins for premium sets anymore. And I actually think it’s a good thing. We saw what happened to Demar’s price because the lock-in was the best card in the game. With no lock-in rewards, premium cards are cheaper. The only expensive cards in the AH right now are either good cards with a ton of added HOF’s or the cards from the newest set (Zion, Tatum, Netolicky). It’s good for people who don’t want to spend money on the game because with a little luck and/or working the AH and just playing the game, I can pretty much have any card I want. 2k has made a lot of weird decisions - the game was much more skill-based in the start of the year (shooting wise at least) and now it has gotten way easier. But people were complaining about it, that it drives the casuals away. So now that a lot of casuals have joined the game over the Christmas, they lowered the difficulty. I don’t necessarily like it but I somewhat understand it. Draft is a shitshow anyway so I don’t care about that mode whatsoever. Just one less thing for me to do in this game, thankfully. So while we always find things to complain about, I have to say that at least if I want to spend time on the game, I can pretty much get any card I want without spending any money. So they have done some things right as well imo.

Yeah the no lockins I like too. Im NMS (yeah yeah) and have 2 Mill MT stacked, have collected every amethyst, only diamonds I need are Steph, Krie, Luka, Loul, Porzingus and a few season set lockins (Moses, Jokic and a couple more). I just put bids of 9950 on them daily and collected them over time, never spending more than 10K, sometimes win a few and relist them for profit.
Have 1125 player cards, only missing most auctionable PDs (I have a few unactuionable - Artest, Dwight, J Smoove, Hill) Plus Limitless Curry (from the unlimited 20 Box) and Magic I got for 65k and he still runs in my team as the big PG.
Plus all West Trophy Case and 13 done in the East (the remaining 7 at 14/15), all Level 40s, Kemp and all the Christmas Cards for Bam, most non Friday takeovers. If it was free, I went for it.

For all the negatives of the game, and there are countless, for an offline grinder like me, I have enjoyed it, S4 has been the opposite really, pretty much reset trophy case progress and removed anything you earnt, I don’t see why they did such a 180, just fill in the agendas if we have the pieces.
So S1-3 I was grinding and loving the game, bulk hours. S4, I logged on today for the moments, did some Lunar agendas (they are cool and great content but I’m not praising them for adding a good concept while changing / destroying so much we previously had) for the takeover player and some challenges for Killian.
Usually I would be grinding TT or CT but just taking a break, the TC, while initially implemented bad, was great once we worked it out.
I guess I will EVO KLove, Drazen and Duncan Robinson.

Not even really looking at XP, am Level 30 from playing but could be 36-37 if I wanted to rent some players/grind agendas. But why? Ill get Lavine and until/unless they announce beyond LVL 40, no rush.

I’m sick today so I have no school and I want try to do the rest of the Yi grind. What should I do and in what order? I have Marion, Wang, Lin, and Nance. I need to do 14 more domination, 20 not Triple Threat Offline, 13 more ClutchTime Online, LNY spotlight stuff, and whatever comes out today. Also I’m on Xbox and if anyone wants to play TT COP later today than I would be happy to play with you.

I’m annoyed that I either have to win 8 unlimited games or Win 15 domination games to get Yi. The grind has gotten so boring. And I only have a few more days.

I just afked them while I was watching Netflix last weekend.

Decent morning here. Lavine and Yi and Ewing from the Trophy Cases. 1 more division for Dr J and Bird. 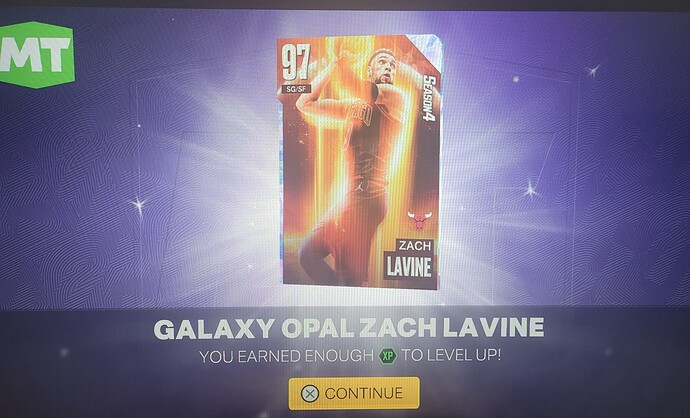 how many hof badges does he have?

Stock for now, 15. I’ll probably just do my usual, Golds only and a shoe. Cards I can’t auction and make profit I usual don’t put HOF badges on them.

Nice little snipe IMO. This is going for around 17k minimum on PS Auction House 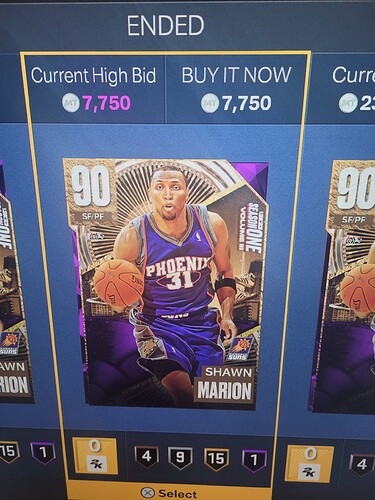