Yeah I’m gonna try a budget squad first. Imma put one together real quick. Let me know what I think if u don’t mind.

What was your overall? Do you use only 5, 8, 10 spots then rest bronze or full roster

Yeah sure hmu with what you put together, mine was 85 overall, 5 starters and rest bronzes to fill out

Currently 7-0 aiming for either Wilt or Worthy, and geez amy Dean Wade has been carrying me. I think he’s shooting something like 80-85% from three over the seven games? Genuinely didn’t realise how elite this card is

My lineup is fighting for their lives on my squad every game.

I’ve decided that if you’re gonna F*** me over with full bars, then you’re axed from the team forever.

Notable guys collecting eternal dust in my collection because they’ve decided to full bar me to death:

Here are some players still alive because I can trust them to knock down & green wide open shots:

Literally the ONLY reason GO Giannis or GO Simmons aren’t collecting dust with the rest of them is because they facilitate my offense with their slashing. They suck ass at shooting, regardless of their 97 three ball.

Moral of the story? Don’t play any damn opals.

LMAO at Wes and Wallace together. Lockdown for days.

Add diamond MRR in there for clamps city and switchability between your 3 smalls.

Playing against these “budget ballers” is one of the worst things you can do to torture yourself. This game is even basketball.

i feel like at 6’9” with a massive player build im happy with nic batums defense and love his overall offensive game. mrr can definitely play tho

what was your team overall?

Guys, how does this team look for my 12-0 attempt. Let me know if you guys have any suggestions on replacements. Thanks! 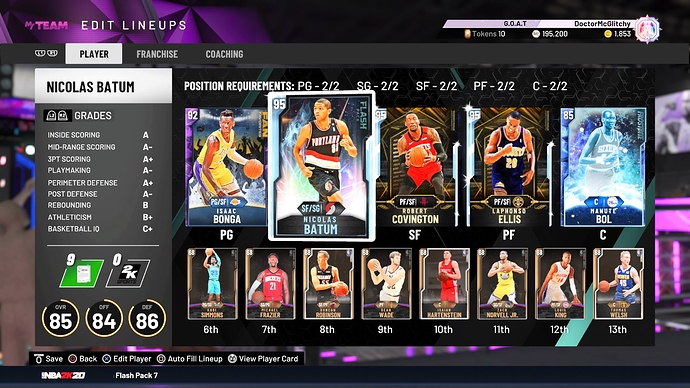 How are you finding Ellis, btw? Haven’t grabbed him as I don’t have a need for him but he seems to be getting rave reviews

I only tried him real quick in freestyle. His release is ultra quick and super green. I was in shock lol. He’s seems to be legit. I didn’t realize he was only 6’8. May have to revisit that. Could always go Ruby thon or Ruby Jeff green (he’s a short stack too). I could also throw AMY Dean Wade or Bamba at the 4. Haven’t used him at all though.

ruby thon and sapph muresan? Or Opal and PD? Man I love that Sapphire Bol. So many people offball with their center and forget that Bol can hit 3s

This image gave me flashbacks

Traditional spotlights with evo cards feels like YEARS ago

Is he still super expensive?