Honestly, I swear just as much as anyone, probably more. But the toxicity and the over the top antics of some players when they win is beyond terrible. Had a teenager I want to say get on the mic after he won going crazy with his C words and other crap. Guys, just take your wins, there’s no need to be sore winners. Take your win and move on, same as a loss. Just move on. It’s a game. Nothing more. I’m not stupid, know it’s a part of gaming online, but some of these kids especially on their mummy and daddys credit cards and next gen consoles are beyond toxic. I don’t respond. If I take the win I’ll usually get on and just say good game. No need to be arseholes about it.

I cannot agree more. My son was playing a clutch game where he was trying out 2 new players and trying out their shots to see if we should keep. The other player is not good but he realizes he is behind by 10 and starts to play serious. Catches up but just loses at the end when he missed a 3 with Giannis. Despite the score being close and the other player not being good, we get messages from him about how bad we are that we should sell our team. I love trying to teach him to be a good sport when there are so many jerks out there.

From my experience, almost all gamers are somewhat assholes. It’s gotta do with the anonymous nature of gaming and competition and rubberbanding/shitty a.i.programming and whatnot.

It used to be on this forum, guys would complain about something annoying. And then guys would comment that they only do that annoying thing when somebody does something else annoying. When you add it all up you realize everyone’s an asshole. Hahaha!

As a gamer, I’m also somewhat of an asshole.

…but also somewhat not an asshole. I was playing limited last weekend and I was ahead by maybe 10 in the third quarter. So, anyway, I had to keep doing shit for my family coz someone was sick. So that poor fella playing me had to wait through endless timeouts so I could get my Limited ring.

Now, even as I typed the last paragraph, to justify my actions, I realized I probably should’ve just given the guy the win. So I was actually an asshole. Hahah!

Haha. Look, we all get frustrated. My pet hate is people pausing and seemingly walking away to do something. My thoughts are if you commit to a game of Limited, you know it’ll be 16 minutes maximum. Go in hoping for a rage quit. If something comes up with family, especially my son with autism and even if I’m ahead, I’ll just quit out as I don’t need the stress of wasting someone’s time when chasing rings. That’s just me. TT though is the worst, if you can’t commit to a quick game of 21, maybe get off until you can or quit out. Time is precious when playing Limited. Easier to quit out and hope the next game is quicker and goes your way.

Yeah, man, totally. Like I said, that was me being an ass.

But, it was a Sunday night at 1 a.m. I had already got a few wins, but no ring. I think I had just lost to a guy full court trapping all game with Deni, diamond Wall and opal Unseld. I had, at max, two attempts left to get the ring before the weekend was over. So I needed that game where I was up safely in the second half, pausing and pausing while running around with medicine and water and thermometers and shit.

Anyway, just taking y’all inside one of those annoying online games, from the asshole’s perspective. Hahahahahahahahaah

Just ignore all the noise, it’s just a game, 99.9% you’ll never interact with that person ever again in your life, so it’s really not important.

I always play with my TV on 0 volume and i just listen to podcasts.

I don’t need to listen to a toxic loser who thinks a virtual game is the most important thing of his life. I just see the microphone icon next to the opponent’s name and it kinda amuses me, thinking he could be screaming his lungs off but it ain’t touching me, lol.

. sending me a message or flash pausing because you’re up by 17 in the first quarter?? 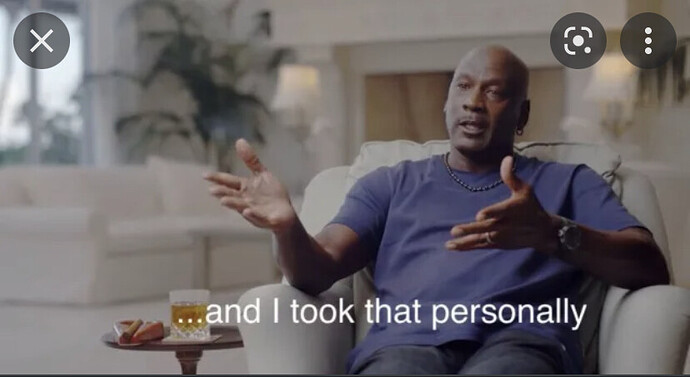 turned into tydebo on his ass

…but also somewhat not an asshole. I was playing limited last weekend and I was ahead by maybe 10 in the third quarter. So, anyway, I had to keep doing shit for my family coz someone was sick. So that poor fella playing me had to wait through endless timeouts so I could get my Limited ring.

Now, even as I typed the last paragraph, to justify my actions, I realized I probably should’ve just given the guy the win. So I was actually an asshole. Hahah!

In my opinion, that’s exactly what Timeouts are for, along with in-game adjustments.

I don’t think you owe not fully using Timeouts if you have a win streak to protect for a goal, and you really need the TO for the game or IRL.

I’ve been in the same situation and I would make it a point to get on the mic and explain why I needed the full TO. And since people don’t always play with sound on and/or don’t have a mic connected, I’d even try to send DM’s after the game, if I could, to apologize for using TO’s all the way and that I wasn’t doing it to grief.

I use at least 3 full timeouts every Limited/Unlimited game, coz i am rolling a cigarette, lol. Don’t really care what the opponent thinks of it, it’s not my problem.

I love trying to teach him to be a good sport when there are so many jerks out there.

Around 3 cycles ago, I was playing an online game and my kid was watching. Was up pretty big and the opponent pulled some pause glitch that kept the game paused with the timer perpetually counting down and resetting, I think.

My kid asked me what the opponent was doing. So then I explained all about toxic online gaming culture built upon pettiness and bad sportsmanship. And then my kid talked, in their little kid voice, about how silly and ridiculous and not nice that was.

All while we were on mic.

From what I recall, a few minutes later, the guy unpaused and let the game conclude.

I’m a dad, so my opinion on that is that you should…pre-roll before the game.

And also that you should quit smoking.

Sorry to lecture. I used to smoke and quit just a few years ago. I get it and a big part of me still misses it a lot.

You’ve got a point. Timeouts are for strategic adjustments and personal matters of any kind. But I side more with @mfawcett: just get on with it, take less than maybe 30 seconds in total to roll through your defensive and offensive settings.

I was surprised, Harry, that you actually interact with other gamers online. I stopped doing that years ago, coz I don’t need negativity from anonymous sources.

I agree about minimizing use of timeout time. I think it’s right to keep in mind that someone else’s time is at stake too.

I don’t interact with people online since I haven’t actually really played any online games since 2K20. But when I did, there was a point when I decided I’d mostly kill people with kindness if I could make myself. There’s no winning in a toxicity battle unless one is willing to say and so shit that is over the line.

And it’s not only better for the world, but actually paradoxically better revenge to be unrelentingly nice.

People who are trying to be an asshole typically don’t know what to do with that. It’s funny to “see” them flailing at how to respond when none of their shit gets to you and you’re still wishing them a nice day and a fun next game, after they’ve said shit that would be fighting words IRL.

Yeah i stopped playing against people because of the amount of annoying crap that just in turn made me angry. no sense adding stress when offline games do that enough. Stupid to get stressed out about but few things in life agitate me more than people acting like buffoons. The thing is back when I played idk if its the same now but things like flash pausing and talking on the mic for extended duration after the game was over should have been easily eliminated by the 2k devs but they clearly dont care to.