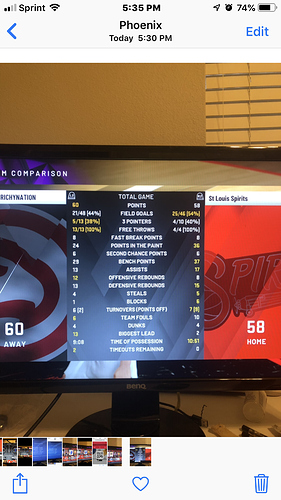 I almost had him.

He was hitting hesi pull ups with Stockton. Dudes really good man. He doubled everything in the paint. Moncreif kept JR from going insane.

I played him last week. Got error after the first quarter, but we were tied when it happened. He had a stacked squad. 2-3 zone of course.

I had a better team than him.

I’d hate to play him in 2k19, he was hitting quick pull-ups in this game. He probably killed it last year.

I played him mostly in TTO last year l, but think we split a couple of MTU games. He’s really good and plays good on ball defense. I just can’t stand his vids haha

Yea he meets you at half court. Hard to do.
It’s nice playing youtubers bc they dont sprint to the basket every inbound.

Didn’t you play JakeMason too? Him, Big C richy and YBC are the ones I’ve played the most times in past couple of years. All really good.

Anyone played Killzamoi? Think I played him once last year. Lost by 4. V good at kicking out and shoot

If Ur in aus or nz then yeah. I’ve played him a few times, only beat him like twice out of 6 9r so goes.

Nice! Gotta good circle of mates on twitter I talk to that kill me in this game. Trying to learn from them lol

You can say that again

I remember my friend got matched up against Smoovh in 2k18. Smoovh was running PD Porzingis at the 2 and my friend made him rage quit.

Yea I tied it up with IT, then tried calling a timeout bc I subbed all my defensive players out before the game tying 3.
Went to auto foul, forgot you couldn’t call a timeout. Pulled a Webber.
Besides that you’d be surprised how many times Isiahs made dumbass shots like that.
I didn’t notice Stockton wide open tho.