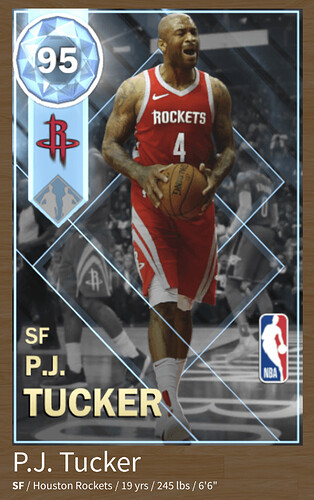 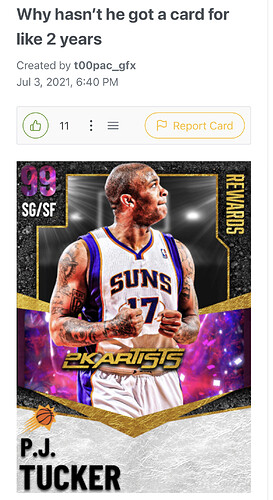 He’s not a “stats player”. He does a lot of work that doesn’t translate to pure stats. If one looks at the boxscores, there’s not much there. Maybe that’s the reason.

edit: But on the other hand, there’s an Invincible Bol Bol and he has spent a TOTAL of less than 4-5 hours on an NBA court, so yeah, Tucker not having a card makes no sense.

We need #18 Lebron more than him

And so true, they haven’t even released C/SF LeBron, Coach LeBron, or High School LeBron yet

We also need a fetus lebron before a pj tucker card

A oop pj could be fun to use

We also need a fetus lebron before a pj tucker card

He actually has a decent jumpshot, too (JS 5) and he would be fun to run offline in small ball lineups. I was trying to run the 17-18 rockets lineup last year during spotlights and what not and Tucker was the one player that didn’t have a color above base.

At least he didn’t get a Season Rewind reward card. That would have been worse than not getting anything.