We still don’t have a top tier version of Sabonis. I’m so sick of these clowns…

Exactly my thoughts Fra. Give the die hard fanbase their card to get 1 more classic but less desired legend out of the way and let the rest re-fill their wallets for the next big drop (Prime 3).

I’m not rolling, the community would use a player regardless of their name. As long as 2k juice the card. 98% of the community didn’t know who Dino Radja was before they dropped him.

It’s simple they aren’t going to juice a card that are in the standard and deluxe packs the same way they’ll juice a card in premium packs.

Cannot agree with you more. 2K unforunately doesn’t care about this, I too grew up reading and learning about the legends and the tragic tale of Pistol Pete is one of those greats who is one of most influential players of his time. Back in 2K15 I remember they had an onyx or something for him. That was so fun to use. Me spending almost 900k for a Lamelo fucking ball when Pistol Pete dips to BIN soon is just a huge disservice to the legend. 2K going to 2K.

So we can just give other guys who no ones even heard of better stats and badges,animations, but yet the guy who averaged most points in college basketball history we can’t give any respect to with that? Something odd there lol…

My all time favorite player gets shafted by 2k every year

Jinx we got a new Pistol Pete today lol

I’m an old guy. I watched him play in the 70’s. They definitely peed all over him. He was “Showtime” before the Lakers. Way ahead of his time. He was doing in the 60’s what they do now. He was ridiculed for being flashy; he would thrive now doing the same thing. He averaged around 44 per game throughout college at LSU if I remember correctly. I used to go to Campbell University basketball camp when I was a kid. Once around 1979 or 1980, I met his dad Press Maravich. Look him up. He was an SOB but he was way ahead of his time too. I didn’t know it at the time I met him, but his wife had committed suicide a few years before I met him, while he was the coach at Appalachian State. I saw him throw the ball against the head of a 12-yr-old kid across the gym because he didn’t think the kid was running hard enough. At that same camp, my counselors were James Worthy, Ralph Sampson, Derek Wittenberg (NC State), ML Carr (Celtics), and maybe Bob McAdoo (I know he came by but can’t remember if he was counselor or visitor), plus several other high-end coaches and players. It was a fun experience. I may not have been the greatest player growing up, but I can say that James Worthy was the referee of a game where I swished the winning shot and he came over and high-fived me and hugged me. M

What a story. Props my guy.

Given the fact that since 2k17 Pete has been my favorite in game player looking at him on paper I’m 100% cool with it, he has the best layup package in the game, he’s one of those players that can create space and get to the rim or shoot, yes his rebounding is low and interior defense is only a 71, but they gave him an 88 post fade also, everything else is fine, he will dunk when he’s open, and given his badges he will prolly dunk on people, in a world of magics, bens, and lamelos, I will gladly rock Pete

Which is weird because they release 1 million+ obscure white guys and juice a lot of them every year (looking at you Guerin), but then disrespect PISTOL PETE.

Like why does Brian Scalabrine get a ridiculously juiced card EVERY SINGLE YEAR, but they shit on PISTOL PETE?

Heard this story from a colleague, but back in 1995-1996 when Toronto had its first season, the city at the time was not a huge NBA city yet, other teams had to use the University gym to practice. And think it was March or so, bulls was in town and at the university practicing for their game against the Raptors at the time. This was a time in Raptors franchise when fans basically paid to see opposing team kick our asses. And this time it was the Chicago Bulls. My colleague was working at the gym for equipments and let players use equipments and etc. Apparently Pippen is a soft spoken guy and super gentle, (she had a crush on him after the conversations). And MJ strolls into the university gym with full on walkman and shades lol. She was intimidated by his presence and in the middle of the practice he lied down on the gym, and my colleague could barely go up to talk to him. They crack tons of jokes and yes, MJ talks a lot, like a lot.

Later that evening, Raptors beat the Bulls, might be because of my shitty university gym.

You get a GO Sabonis for collecting an ungodly amount of cards but that is the only way. Sad really sad.

To be fair, brian did win one more championship than Pete

And he isn’t even good. And unlike the other GO rewards, he got no EVO or anything to make him better.

Yeah, no way the Celtics win that ring without BRIAN SCALABRINE!

The only disrespect is what this man does to his opponents 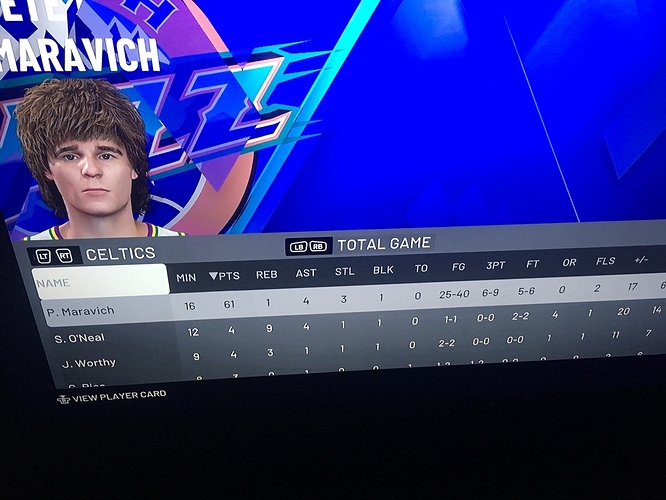