Packed Shaq on my second single - do I badge him up to sell?

I have HOF limited and Circus threes. Should I added and sell him out or hold him and see if his price rises due to his rarity?

No brainer, add & sell. That mt will get you two inv cards in like 3 weeks.

This is so much from though …… 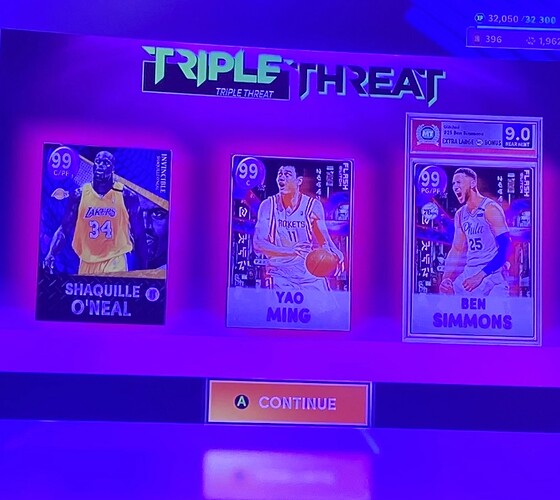 Yao 36HOF W/ …. Deadeye & Chef (yet to see one up with deadeye, I’ve been looking to see what he sells for)
-I’m not exactly sure how deadeye works but the badge makes every shot max 30% (usually 23%) contest … that’s when I’m standing in place for 5 seconds and decide to randomly pull the trigger.

I feel like the badge decreases the contest % instead of making contested shots fall more, I could definitely be wrong but I tested Yao without Deadeye and the same shots were 40% contested on average

When should I post him and for how long (I’m in NYC on the east coast)?

I’m heading to Chicago tomorrow morning so realistically between now at 7am tomorrow or should I wait?

I would do it before people realize he is not worth that much. Usually Sunday night is best but since he is going for so much now, consider having it end around 8-9 EST tonight.

Your the man, thank you.

Idk man, the more I play with Shaq the more I’m falling in love with him. I find it easier to score at will with him then either of the other two for reference. All 3 do very different things in the Court and play nothing like so in that sense it’s hard to compare these exact three that said I can literally score of the shaq any time I want in 3v3. I can do the same with Yao but it’s harder with a few less ways to do it. The ways he can tho are beyond comparable making my Yao (deadeye I is a major factor for me tho, I can actually shoot on anyone under 6’7 or even taller with short wing spans) offensively the best card In the game for me. Shaq is so dam close tho with D that is so far superior to any other card in the game it’s inane. He can D up anyone 1-5 which is crazy so idk… I’m not saying he’s worth 2 -3 mil but I am saying he’s insane

I’ll say this about Shaq, he’s the best at what he does (which Happens to be a lot). His movement on D is stupidly fluid and on the flip side he’s the best big man over 6’10/11 (not just C) with the ball in his hands In the game. His shot is no where near the likes of Yao or even Joker but its not horrible. The reason I say it’s not terrible is for 1. He puts the ball over his head and not in front of him which makes his shot almost Unguardable … if you can hit. 2. If you use the meter his shot is incredible not even kidding incredible, if you use no meter it does have a setpoint at the top where you can find his make window (comparable to Patrick or Alonzo for me)

Or should I wait till I find a large gap making him the only card to bid on for X hrs, I risk having a card in front of mine which could hurt his value.

Which one do you think I’ll get more for? I’m thinking I’m going to post one of them in the next hour, for 24hrs and see what happens. I’ve seen like 1 Ben with Circus 3s since he dropped which seems to be a bit more rare then Deadeye but I’m curious what you guys think

I bet the deadeye still goes for more. 2 badged Simmons and a 99 Shaq? Wow. You are definitely going to be in good MT shape. What did you decide to do about the Shaq?

I feel like someone who Abuses fades could make that Simmons the best card in the game. Unfortunately that person is not me, I rarely shoot running fades even with Simmons silky animations. We’ll see how much he goes for, he does have 33 HOf’s and was the only one who had Circus 3s and that includes a 45 HOF/ 35HOF Ben.

Low key I was also worried keeping Simmons in my AH outcomes, I felt I could accidentally sell him somehow and wanted to eliminate a drunken half a mil+ mistake

Shaq on the other hand … I have no clue what to do. Like he’s so beyond dominant that it’s hard to fucking sell him. I also am not sure how much MT he’d fetch, I haven’t seen any card on the market with both Range and Circus 3s added outside 2 like 80HOF Shaq’s. Any idea what you think hell go for if I throw him up for 24 hours (about now).

I’ll say this, I might value Shaq more than the average person considering he plays the main ball hand or next to yell making the pick and roll/anything I do with the two of them almost unguardable.

only gold limitless and no special delivery, just do yourself a favor and quicksell

bru, even bonga has special delivery. its just truly sad.