Is he good? Anybody got him and had some gameplay. Didn’t see any thread on this. He going for 100k or less on ps4 .

How much u get him for?

I love him. I have one i need to sell but dont know what he goes for

Man that a good price. I thinking about picking him up . I was going to snipe me a ad or hakeem but that going to take some time sitting on the auction house. Last night I kept missing them by one min because I’m looking for other cards.

got myself a keeper 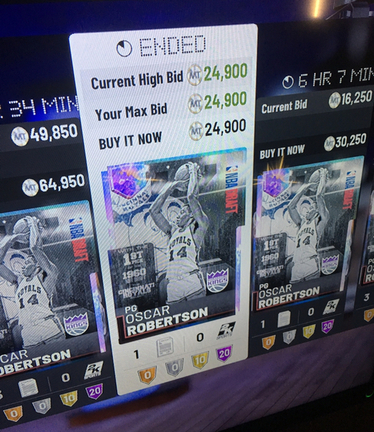 y’all in this thread led me to get him, so for that i thank you

I’ve been using Oscar all year. Upgraded my diamond to Pd, now my PD is an Opal. He’s the best point guard in the game. But you can get similar production from a sf like Lebron who is taller and has same badging.

but oscar comes at a way better price

True… especially for you.

For all Oscar users here, what cards do you not feel comfortable having him cover?

The opal can guard all 1-3. But i would say I would be open to switching him when playing against Magic Johnson, Ben Simmons, James Worthy, Paul George.

What shoe do you recommend with Brad Stevens?

I’d probably grab him during the award packs. His price is going to dip low and he hovers around bin and lower now on Ps4.

He’s a game changer man. The HOF limitless and that cheesy HS release is just nuts.

I love the timely rebounds that he gets but more than anything this Opal catches bodies and just attacks the rim like Drose.

Such a good card man.