Magic or Luka on next gen? Luka has dropped in price by like 1 mil it seems. Thinking of maybe selling him if Magic is the better option.

Yeah ok this magic is special… 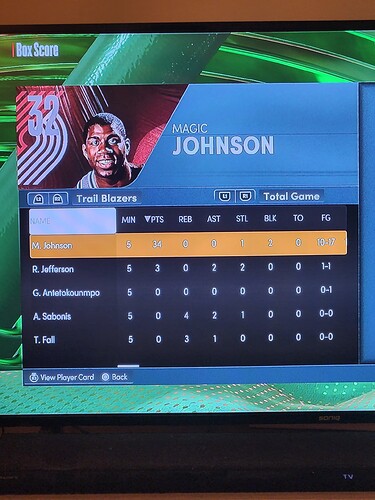 Haven’t used base 3 this year and was a slow start with it hence the 10/17 but I was probably like 2/8 to start and then it all clicked. He’s a bit of a monster. I reckon he might be better than Luka… If he’s not better, he’s certainly more enjoyable.

Yeah-it is a great card. I sold mine back last night and took a huge loss. And of course he is back over 2M this morning.

Now I remember why I didn’t want to play this game anymore—I hate the AH system as I never end up on the right side of this equation.

How much did yours sell for? AH is largely a crap shoot which sucks.

At these prices (like for the super expensive cards) it can simply be a couple of whales that just want the card right there and then and don’t care how much they bid. After they go away, the price for the next cards could be substantially lower.

Yo Giannis didn’t even get a rebound lol. Sell that fool

Bought for 2.1M and sold for 1.7M. FWIW if I had my stack from last year I would have kept the card until the end of the game as my PG. But I only had 2.4M at the time of purchase. Now I have less

I am locking it in, way more cheaper on PC, I suppose.

Hero MJ was the most expensive at 120k for me, then Russell at 100k. Rest were way cheaper, eg Duncan is just 35k now.

Is Magic that much better than INV Ben & Luka on Next Gen? I’ve heard he doesn’t move & groove that well even tho he has the best animations

The fact that he could be the first Invincible to hit BIN does not mean that this year’s version sucks. It doesn’t

Same. Got mine for 202k to complete my all Invincible starting 5

What do you mean? Is Lin really good or really bad?

Really good. He’s like the fk Flash out there. Moves lightning quick