Got the whole set, KD to me is more of an upgrade to the prime opal than GOAT Magic is compared to fully evoed Campus Magic. Not sure if Jonathan Isaac is worth locking in for 2M. For context, love Thon and he’s my favorite card! Here’s what I’m currently rocking with (Don’t have KD in this pic but he replaces Shaq). 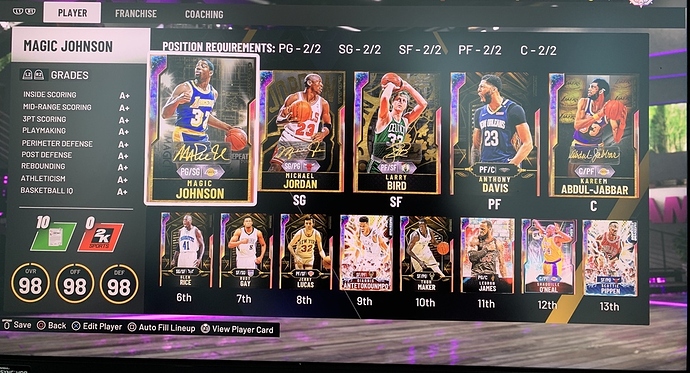 Played someone with Thon last night and Isaac tore him a new one. He blows by everybody for some reason

If you’re already deep at PG then I probably wouldn’t lock. Isaac is 100% a endgame card though

Edit: yeah you don’t need him. But imo he’s better than Thon and pippen.

Emm this set is more usable than KAJ’s one but I still lock for KAJ.

Wouldn’t the real question be how much MT do you have left after locking? Looks like you have the best cards the game can offer based on tier. If you have enough MT left over, I say fuck it and just keep them all to see how it plays out.

Isaacs pretty good. Player model is huge. Shots not too fast or too slow. Solid card.

Gotcha that’s super helpful! I guess the question really is Isaac as good on D as pippen, could totally replace pippen with Isaac.

Haven’t seen anyone abuse screens with him - could he potentially do that and peek off of them? Wasn’t possible effectively with the diamond version (just did it to try)

I’ll be left with around 2.6M - I will be locking GOAT in yessir. Barring that I’m holding off for the last prime player as well. Do you see Durant falling to like 1.2 M anytime soon?

Going up against Isaac now… Hasn’t done anything.

Yeah maybe so… He hasn’t done a thing at the 1 for this guy.

If they gave him all the glitchy animations this would be a no brainer lock. Not sure why 2k held back.

I assumed I’d lock at this point, it’s June. They made it easy to not do it. Strange.

Nope. That KD can yield some MT back

No point in selling this KD

Yeah that’s the rub. I doubt I sell this KD, but this Isaac looks mid.

He is. His shots reliable and he can guard almost anyone. Amazing defense. But a top tier cone for sure

The content would have to blow me away to sell KD. If they can top him I’m dying to see it.