Where are the leaks? or this is ENDGAME?

Looks like endgame. Cannot believe they could not do an extra 2 EG cards.

they did release limited cards this morning… so it sounds like end.

It’s kind of weird that even tons of legends of the game haven’t even got invincibles.

Laughable when Tacko has 6 auctionable DMs and MVPs like Nash or Malone have none (highest auctionable are PD and A respectively!)

But Tacko is a much better player in MT than any of those other “skins” that would go on cards at this point.

It is more surprising that we didn’t get.the EG Bols or Sim Bhullar. And where is Muresan as an EG shooting guard?? Lame.

What a fizzle out, 2k is in full DGAF mode.

So am I. I’m not coming back anytime soon to this game mode. I already quit Madden (MUT) and now I am adding another game to the list.

I have appreciated this site and the community, but moving to other games for at least a few years. Maybe I will be back for 2K26.

after they dropped the 2k23 blog i’m cool on this game dying. i’m ready for the new game

Yeah, fellas, can’t expect too much. We all got hundreds of hours of gameplay for our initial purchase.

Fizzled at the end with End Game, and too many giants to enjoy competitively online. But we did get lots of stuff to do and lots of basketball to play.
It was alright.

yes, we did. But Ty’s rant on YouTube puts things in perspective of how much 2k have screwed us, the consumers over by not supporting the game until the end. Even put interns into positions to give us cards and more content to last us up until 2k23. This has been very poor the whole season and the rewards they’re offering us are terrible at this time of year. Look at last year and the link I put on the Limited chat from JD Crossover and the overview of what we got in season 9 last year and the 3-week season. They haven’t even attempted to give us anything to do. This is literally the only basketball game choice we have, there is no competition or incentive for them to give back after the literal hundreds of millions they’ve got from their consumer base. FIFA at least keeps updating daily all the way up and even past their 22 version. It’s beyond poor on 2k’s behalf.

I don’t want to argue against any of your disappointment; your opinion is as valid as any. I would like to add, however, that I believe an intern can schedule this stuff just as well as the higher-ups. There is remarkably little intelligence or acumen that goes into card releases.

If 2k16 or 2k17 are an A+, maybe this one has been a B+. I feel it’s only the extreme superhero-player departure from reality that prevents it from being the best ever. Anyone else have a 2k22 rating?

I’ve only been back playing since 2k20, but I’ve thoroughly enjoyed this version the best for gameplay, especially on PS5. Overall the content has been great. Just disappointing that knowing other franchises, they continue excellent support all the way up to the next release. Just hoping they give us another shortened season to tie us over until 2k23. Though in saying that, I’m contemplating a year off and concentrating on games with ends. Elden Ring and other stuff.

i really hope we get token packs like 2k20, but im sure we wont. i was disappointed last year and i most likely will be again. 2,000 tokens and absolutely nothing to do with them. ill wait another week and then get dr j i guess

And that’s the problem for us costumers, the lack of competition. Take-Two knows this and they capitalize on it to the max. They don’t need to put effort in the game, the sales nummbers increasing automatically every year.
I really hope NBA Live will make a comeback but like I heard this year is also a NBA 2K year without competition.

think nash has a card thats dm from the hero challenges and karl malone has one from collectors. i wish we got a better drexler tho because collector one i couldnt get

Well if this aint some bullshit. I understand a new game is coming out but the content they have been dropping has been ridiculous. I feel like this whole szn was a joke. 4 players a week was not it. I thought after the set was all done we would see some good players. 2k has got to come with different players next year. It seems like every year has been the same with the timing of the cards. Not to sure if im goin to be gettin 2k23.

Looks like only Endgame and Invincible packs. Not sure what the odds are to get anything as no guarantee.

@NBA2K_MyTEAM
Get the best MyTEAM cards of the year in new Invincible Packs and End Game packs 💥 Featuring 50+ Invincible & 25+ End Game players to power up your squad ⬆️ https://t.co/o1NF72MFxv 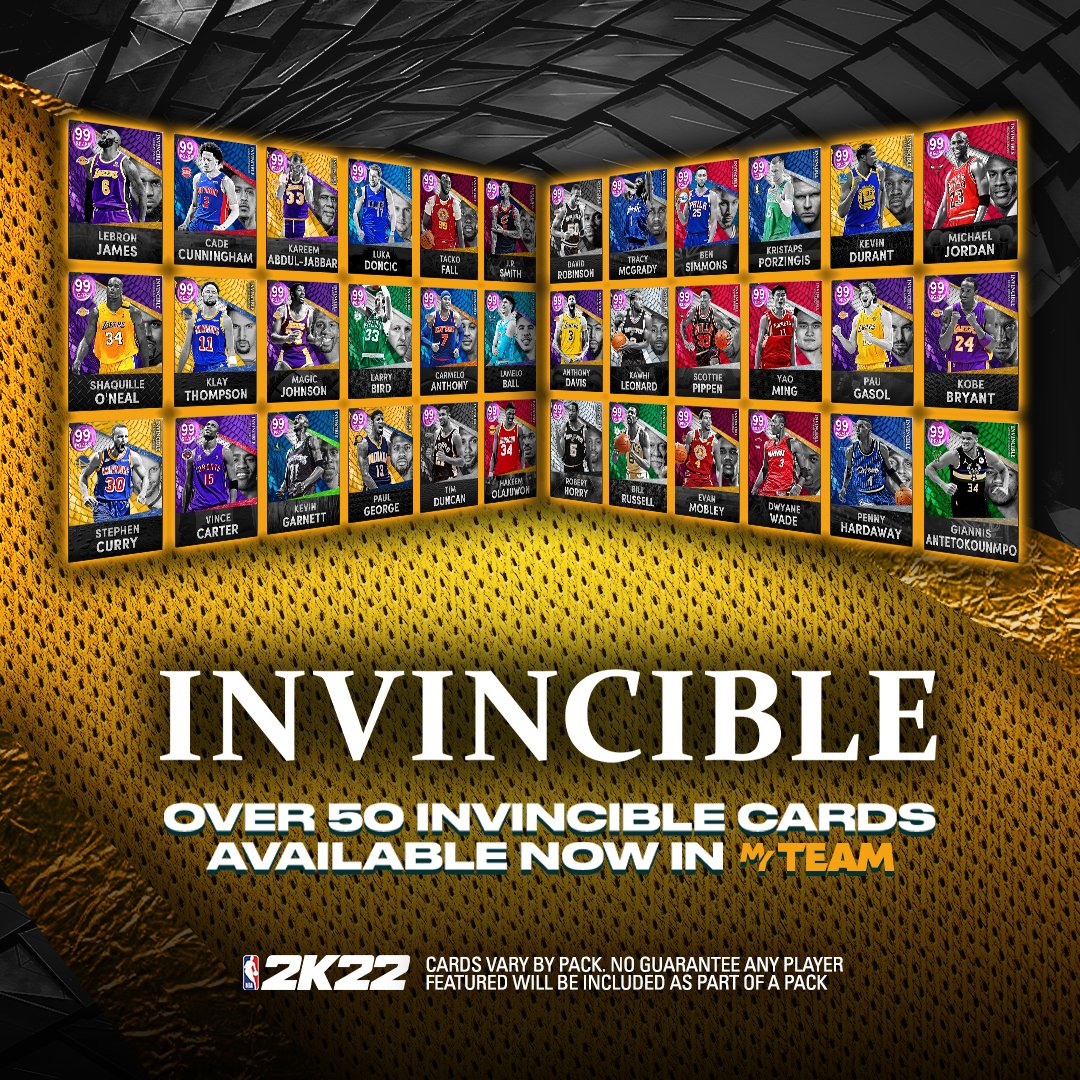 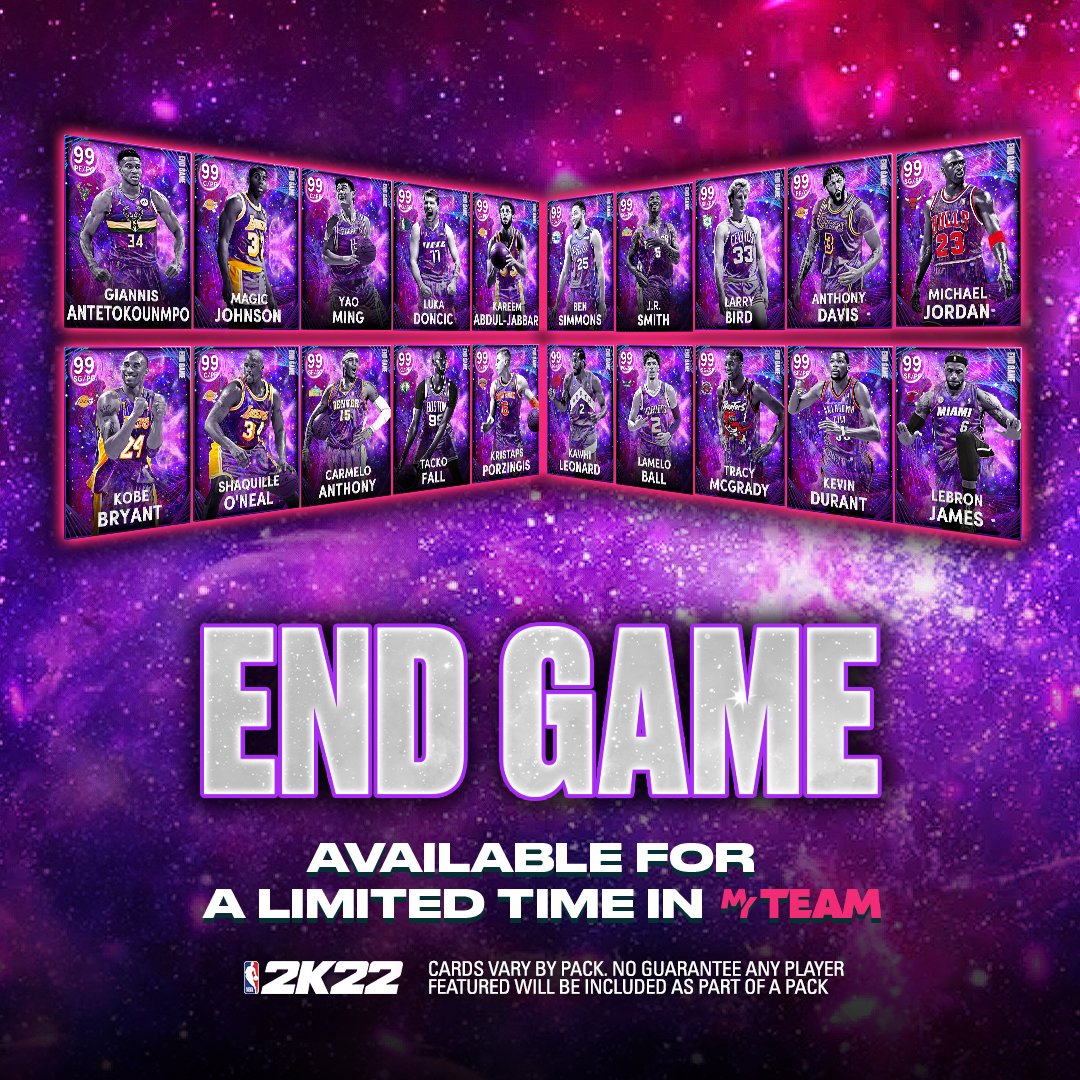 The move was def to sell the MT anniversary cards lol. Got EG SF Giannis, Kawhi and AD for a combined 80k

What?! The prices of EG cards went down that much? What system?

Market is done and Squad is complete. Good way to END 2k22.