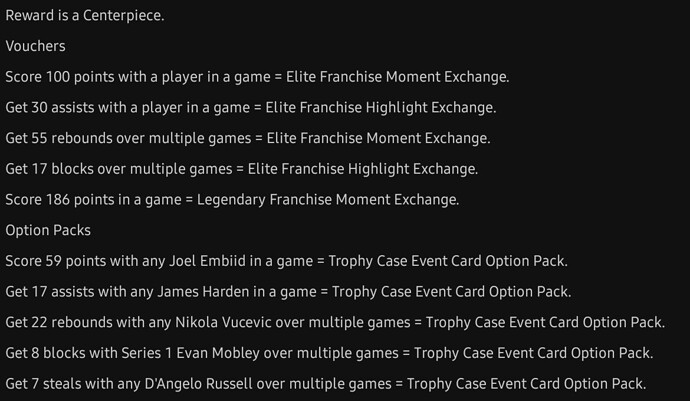 I’m not home, how long is the event up for?

Huge W. I was able to do all of them except Vucevic rebounds and 3 of the steals in a single challenge game while also getting Royce O’Neal’s triple double. I did the math and I only need four more rng pieces for my entire trophy case now. 2 current jerseys and 2 elite accolades

If I only have Rose and Russ is it even worth trying to grind for one of the Opals now? Or do I just grab the PD who suits my lineup the best, which would be Worthy?

Probably just get Worthy. AD is probably going to be the most useful opal anyway and you’d need AD to get him, but it’s a long ass grind. Hayward is pretty good though

Yeah AD is most likely the best but no chance I’m getting him if I go into S3 with just Worthy collected. Also I feel like the other PD’s in the AD set are really poor.

If I want an Opal it’d have to be Jimmy or Clyde, but again, getting another 3 centerpieces is a heck of a grind.

You’re right, Poole, Peja, and Nash don’t even play for me. I have to try putting a 3pt shoe on Brand and see if he’s viable at the 4, his rebounding stats are crazy.

Yep this is how is see it too.
15 next season and they prob won’t expire to allow anyone coming in S4 onwards to get into the trophy case quickly.

Do we see a trophy case V2 though? I can see them doing it to start S4. Opals as the base then DMs as the lock ins.

I like the idea of the trophy case and I was pretty patient with it and saved my pieces until I had an understanding of it and wasted none.
I have all of the northwest (Russ and Hayward still play for me, Sabonis holds a bench spot). Clyde is elite.

Working on Pacific now for AD. Worthy is top tier and just unlocked Brand. Hokedtly I didn’t know who to take out of Brand, Poole, Nash, Peja. Brand seemed like the most likely to play with HOF bully and his stats / wingspan / player model are good.

The other 3 are just a way to get AD honestly. Have CT co op, CT Offline (at 30 wins) CT Online and TTO to complete still. So 3 of them hopefully get done by seasons end of I want to grind.

I have 3 (Sabonis, Howard and Russell) plus I just got (literally 5 minutes ago)the Centerpiece from the trophy agenda.

I have to decide between Wally and Dikembe.

I am also 400 tokens shy of the second token Centerpiece, I can get 200 from collector’s level (40 cards away) but no idea how to get the other 200, other than by locking a set, but they are all expensive and I hate locking sets …

Sheesh, I really hope they don’t do another trophy case and they just do spotlight sims or something. Or fingers crossed they bring back mode specific rewards because these takeover cards are just not it anymore. I quit limited after the 2nd ring because I don’t see any of the options making my lineup.

Yeah true they should be easier to get in S3. I don’t mind getting the Unlimited one because I play it anyway but the other ones are terribly boring to grind for.

Think it’s between getting Worthy or going for Clyde now. I could pick Hayward as a pladeholder for now, he looks alright from what I’ve seen.

Will there be more Trophy Case players? Has anybody heard?

No info yet but I wouldn’t be surprised if they brought out a second set at some point. Then again you can get DM’s from this Trophy case so it’ll probably be a while before they bring out something new.

Started going for Worthy. Just need Dom and the Series 1 lock in.

Do you guys put any of your HOF badges on these reward cards or do you strictly use them on auctionable cards to try and make MT?

I don’t believe in putting hof badges on non auction able players but that’s just me personally. They will be outdated not to far from now I would guess

I think everyone is different. To me it matters how long I think I will use the player. If it will likely be at least 3 weeks as either a starter or frequent sub, I do it. Realized Westbrook would be PG for me for a long time. Put on HOF glove a day after I got him and never regretted it. However, take anything from me with a grain of salt. I have only got one PD from AH (Kareem). To me, the HOF badges are to make playing the game more fun. I only sell those players when I think they are nearing the end of their cycle.