So maybe I’d inadvertently forgotten or was doing it without noticing. But there’s a slight penalty for pressing the shooting button prior to catching the ball when receiving a pass. I’ve been consciously making sure I wait that split second the last 4 or 5 games before I take the shot and I’ve been shooting consistently above 45% putting up a out 12-18 3s a game.
Huge improvement over the games where I’d go 3 for 17, and I’m also seeing a lot more greens.
There is a slightly smaller window for closeouts if you’re playing someone good but the difference is from bricking full whites at 4% covered to consistently hitting 33% covered if you take that second to wait to shoot.
Hope this helps someone

Tjerryday posted a 1:30 clip on his twitter it will show you why you’re making more threes

THIS IS THE WORST GAME I'VE EVER PLAYED IN MY LIFE. I REFUSE TO HELP PROMOTE YOUR BULLSHIT 2K. IM TIRED OF YOU SCAMMING AND MANIPULATING US. YOU WONT FIX YOUR GAME BUT YOU'LL FIX THEM VC PRICES. VC IS THE ONLY THING THAT WORKS PROPERLY SMH. I WILL NOT PLAY IN 250K AND HERES WHY: https://t.co/29A5cfo8OX

Yeah I do see a lot of those go in, but because I’d like to think I have some basketball IQ I don’t take those shots, maybe I should start?

I played TJ and I don’t know why he’s complaining, he plays the same way. lol.

He does but he I feel like is also just talking about the things that happen to keep people in games… most those shots you should never ever make, if you shoot a red bar heavy contested it should always miss unless it’s a layup then maybe you can get the animation… but in no way should you make a 3 pointer that’s like that

What is that crosshair in @Bones191 avatar?

wtf did i just watch? 2k20 is worse than I thought and it was so bad I stopped playing it a month and a half ago

The worst part about this is when you get too frustrated to play online and decide to just grind some offline content and the CPU starts hitting late smothered shots on you too.

You hate to see it 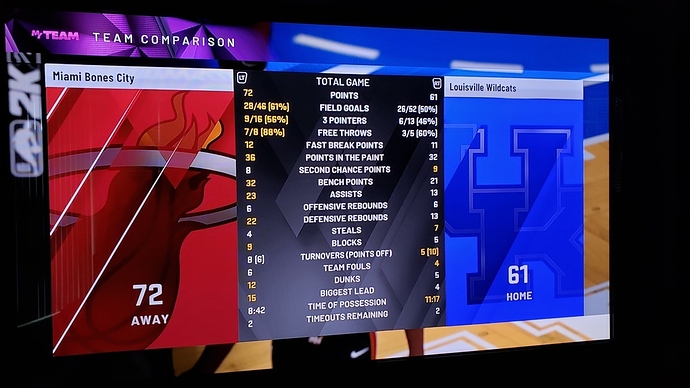 Tbh, the solution is simple.
Either stop complaining or stop playing their game.
By now we all know that they won’t do shit to fix their game, no matter how hard people complain.
The only way to make them actually fix stuff is to stop buying VC and playing the game.

3 things they need to do:

I get that not all open shots should go in, but I feel like I make wide open and contested shots at about the same %. That shouldn’t be. And I feel like this is the first 2K it’s been like that.

It got even worse since then

The worst part about this is when you get too frustrated to play online and decide to just grind some offline content and the CPU starts hitting late smothered shots on you too.

You hate to see it

I would rather have it in game personally. It may piss me off to see my opponent hit a very late smothered shot in my grill but at least I know I’m playing the right way and 2K is just fucking me raw

I don’t see it happen very often TBH. I think people rage and remember the ones that go in and don’t think about the other 100 that missed before it. I’ll certainly take the odd contested shot going in over Hedo and fucking AK47 pulling up form the logo with base 11. That was truly terrible.

Behind the back escapes and hop steps are problems I agree there. Paint defence could be buffed a bit, but I think people got to used to just standing in the paint hands up and getting 100% contests. That system to me was much worse. You could legit have 6 foots guys playing hands up in the paint getting 100% contest on 7 footers. It was terrible.