Starting a new month with final squad of season 7 for me:

Finally got Sabonis, gonna try him out soon. All in the starting lineup have 80 badges except Steph. God bless you. I did not like that George at all 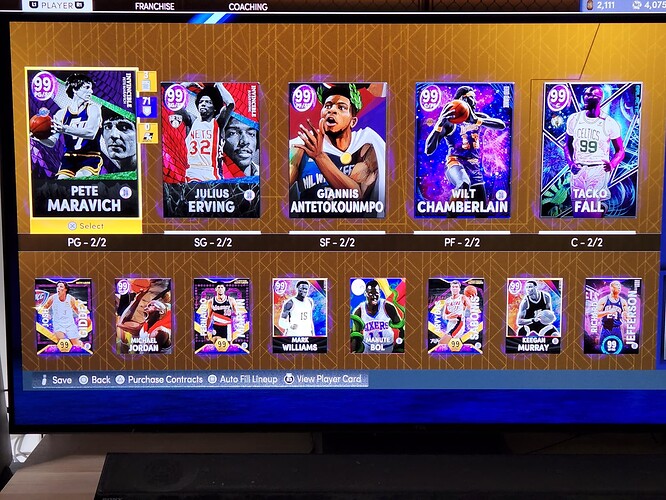 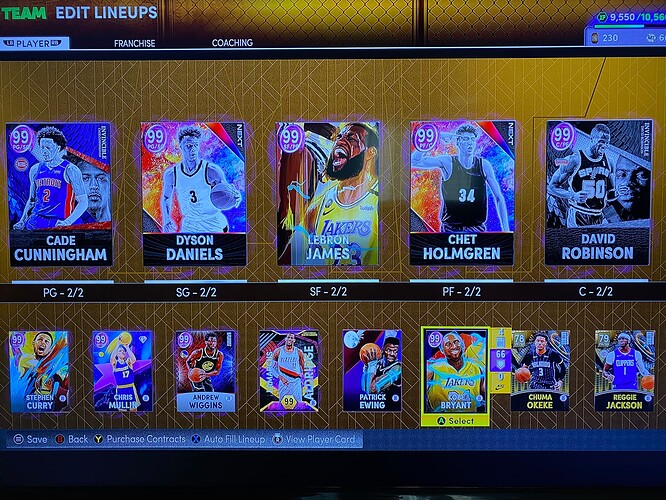 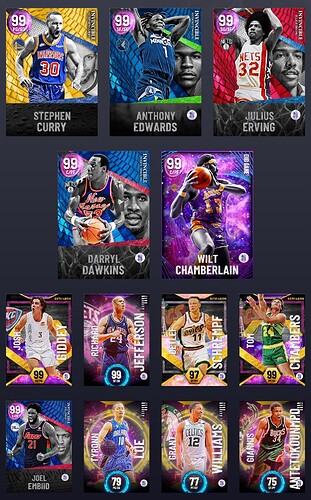 This Schrempf/Chambers duo is fun.

Starting off the season with these dudes.

Haven’t found a backup C we like besides Yao 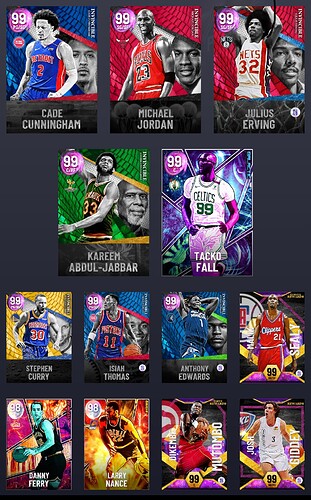 Is Tacko Fall that good ? I mean yeah he’s tall but that’s about it

Unfortunately yes he’s the best C in the game. Legit a brick wall on D and his shot is butter

I think Kareem and Wilt are better, as good as him inside and way better outside. If you take Tacko to the perimeter, they can run around him so easily.

That said, he is way too OP for such a meh player.

At least on current gen, I do not see any center really being better, esp when Tacko gets badged up. I now have a 54 HOF badge Tacko and have not seen any centers that give him any trouble. I found that a strangely really good badge for him is pickpocket. When I upgraded him yesterday, this badge was one of the new ones. All of a sudden he is getting multiple steals each game. The other new badge that made a big difference was HOF QFS. He just moves past players with ease whether off or on line.

Right now he’s kinda the best. I had him at 64 HOFs and sold him, then bought him at base HOFs.

I would recommend getting a basic one and adding gold shooting and dimer. He basically has all you’d need in the original version. He can’t really dribble, anyway; so no need to try to make him a playmaker. HOF quick first step added is nice, though

Have not played with a base version of Tacko, but it does seem that the HOF badges make a difference in terms of help his shot from the corner (surprising easy to green) or with some playmaking. Found one with HOF Dimer (still my favorite HOF badge) with extra HOF blinders, deadeye and QFS and he just seemed even better than my prior Tacko despite having a worse shoe (for now). You definitely do not want to dribble him through crowds, but I find that he can be really good going one on one with another center if needed and does get by more often than not.

So after a quick check on 2klabs for next gen:

Tacko has hot zones on the corners and a relatively low 3 attribute, so there should be some stacking benefit especially noticeable in the corners

Who do yall prefer between Inv Cade and Dyson on next gen ?

He’s so good. Absolutely find him to be far superior to the likes of Shaq, Wilt, anyone else really. Badged and shoes up with a speed coach he’s just on another planet. Smooth movement, ridiculous blocks and shot contests. Can rain deep 3’s with ease. He’s just a monster.

Has anyone picked up Dr. J? I’m so close to pulling the trigger

And Handles For Days.