I cannot believe how many opponents were not using the Deni -Rui duo and Sabonis today. It does explain why we were 16-0, all but 2 were rage quits. However, we have not seen the ring (even a miss) once yet. If we had not been winning so many games quickly, we would have quit Limited again. It is ridiculous.

Edit - played 17th game after taking a break over night. Finally got the ring (on left side). I only played one person who used the Deni-Rui duo. Very very few used Sabonis. I have no idea what people are thinking. Maybe it is too easy to play with those 3 in your lineup?

Well, Rui is about 15k on XB1 rn, Sabonis about 10k, so not everyone want to press the trigger on them for one weekend. I’ve seen those two probably every other game so maybe you just got lucky

I must have been. Other limited weeks I would see all 3 all of the time. Did not realize Rui was that high in price.

Once again Arvydas saves the weekend. I just don’t understand why people don’t use him, no matter how much he costs. He’s literally the greatest investment in 2k22, he’s the top card almost every weekend.

Only game i didn’t use him, was my final one (i already had the ring), coz i needed 13 OO players for the weekend III agenda and i used Ruby Jalen Smith (also a really good card).

one of the worst limited weeks, i hate limited reqs that involve gem colors. I like restrictions on things like height, shooting, speed, teams, or anything unique.

I played 2 games of limited, 2 quits on the first 2 minutes, no ring. Going in for the 3rd game, i get a message “your lineup does not meet the requirements”… WTF???

OK turns out they included the 13 players from same franchise after i won my first 2 games. Went with Lakers on my 3rd game, ring in the middle.

Lakers are good since they have multiple end game cards to choose from. And the Caruso/Kuz duo that makes them Dark matters.

Currently using Rockets just to get my MT’s worth from buying end game Yao. I haven’t seen the ring yet.

Yeah, Lakers were the way to go. Also downgraded a few for Weekend Warrior 3 agendas to get the 2,000XP for 13 original owner cards. Had to bring in PD Pau and Amethyst Monk and swing Kuzma to SF. Wilt changes the whole game at Center, lol.

I went back to the well and ran the wizards, haha 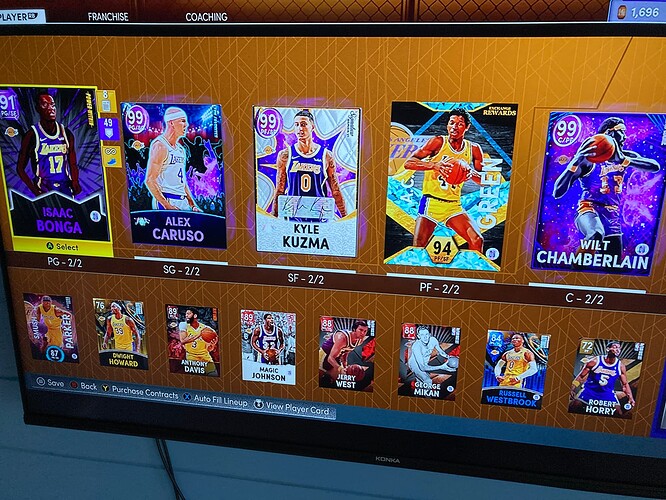 Bloody hell. Thanks a lot, man

Last week did not see the ring at all until 17th win. Today first game/win and got ring in the middle. Also used Lakers with endgame Magic, Caruso/Kuzma duo, A Bonga at SF, and D Milan at center. Son easily beat a Sixers squad but opp insisted playing until the end. Glad that is over with and we can get back to our quest to get Webber in clutch.

I only got to play Limited right now and played one game. Steph carried me with an insane all around 50-piece today and I got the ring immediately It was actually a fun requirement this weekend. Got ring in first game with a Lakers squad led be EG Magic and thought that was it. Later decided to play a game with a Celtics squad led by Tacko and had a rage quit by the third quarter.
Sunday night I was just playing TT with players I have not used much when I noticed how fun DM Granger was (I had found a supercharged one when prices had fallen but never used him). Put together a Pacers team with PG GO D Sabonis (extra 12 HOF badges), SG D Lance Stephenson, SF DM Granger, PF R Smith, C PD Hibbert and played a Warriors team. I always have trouble hitting 3s consistently online (except TTO) but Granger was amazing. He would hit a 3 from anywhere. I also now know why everyone uses Jalen Smith. He also is amazing and easy to green. Even got to use Gold JaKarr Sampson to help with my PF/ C rotation and found he is as good online as offline.

Any word on Limited for this weekend? There seems something wrong with the 2KDB page. I might use this weekend’s limited to help decide who I should dump HOF badges on.