That’s fair. The 2 month grind was a good time-waste, and then the Bird grind instantly was so much better. But the card itself is tough to use now

I got the best version of Kobe Bryant in April and have been able to use him for 5 months now. No shambles for me

The ass opals though, or are they good?

i don’t think goat kobe has been the best card in the game even for one second,people who grinded did it to have the best version of kobe possible which they got

Same bro. At this point finishing the grind cause it’s something to do (I try not to just do Sts/make it less boring) plus outta sheer respect for the Black Mamba rip

I have no regrets grinding for Kobe. I said it early on though (right after GOAT Bird was announced) that it felt right having GOAT Kobe as the best card in 2K20.

I had no idea that GOAT Kobe would be the first of approximately 20 GOAT cards. I truly thought he would be the only one in that series. Now he’s unfortunately an afterthought and I’m struggling to even put him last on the bench of my End Game team.

I’ve been doing it slowly and still have 2 teams left, but I’ll have him this week. Just hoping that 2K gives him and GOAT Shaq a duo together.

There is STILL a solution 2K could present this week. Either a Duo with GOAT Shaq, an EVO, or best idea - just juice all of Kobe’s tendencies.

Zion, Jokic, and Middleton are pretty good and have juiced defensive tendencies. Zion is way better than the lock in one for NEXT. He just can’t play PG.

the new ones all have 99 everything and 60 hof’s. zion, middleton, and jokic are very nice

Thanks for reminding me of more shambles haha! I locked NEXT for Zion and this cheap Zion is 10x better than that one.

That’s the only true shambles from this collection. Oh…and AD being better than the collection rewards one.

I hate how people act like a million cards are better than Kobe because he doesn’t have 2 animations that people sweat over because YouTube told them to. The cards literally perfect 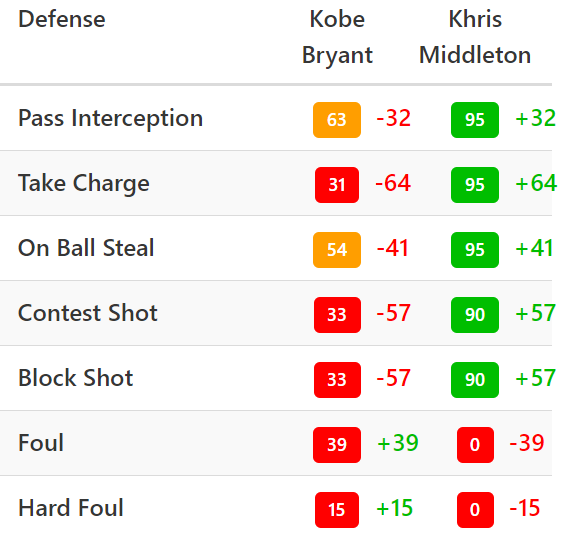 But they don’t have good animations, I don’t know if they’re better than Kobe to be honest… I don’t have Kobe, but his sizeup is very good and his shot at hof QD is almost as fast as the best ones

Zion has long athlete layup package and Jokic has a really good btb. Zion also has Kobe base.

Jokic is unusable for me, Zion should be good, I remember liking his free diamond for Christmas. His shot was fast

But with the 5k MT Opals being miles better than GOAT Kobe, I officially and finally feel the shambles. It hurts, y’all.

None of them are Kobe though…

12-0 meaningless anyways at this point, just have fun. What do you even need from winning?

Enjoyed the goat kobe card for a few weeks. True there are other good opals yet still this kobe card will never be replaced, although maybe if there is another better kobe card he stays