Is this the most expensive squad on nba 2k20?

For say goodbye at that game I want too see when is the most expensive lineup that i can set-up on nba2k20. 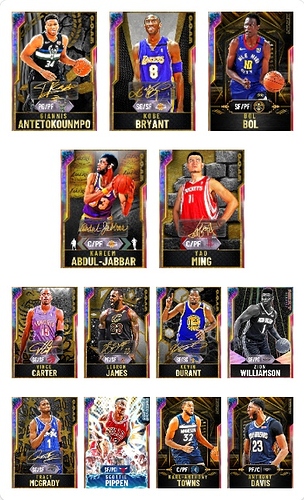 I explain the section of three of them, the rest no requiered imo

Bol Bol. Can be any other player of GO token market, the point are that you need more 3000 tokens to unlock the first opal, and “only” 750 more to unlock the second.

Kobe. The longest fuckest grind on a game. 300 games to unlock him.

Anthony Davis. The 2900 cards collection
The amount of time and money required for that is huge. Obviously not worth at all since the NIB Davis landed.

Repeat, i think the others players not requiere a explanation.

I forgot something, maybe Jonathan Isaac for KAT?

It kind of saddens me that I quit 2k months before Opal Zion Williamson was in the game. But I’ve used Steph Curry before and in Myteam I’m sure Zion will play like a 6”6 Steph Curry and not like the Dunking Machine he actually is.

Most expensive Squad ( i think ) - not the best but most of expensive. Your Kobe is free for example …

Unfortunately, he plays like both! It’s silly how he nails transition threes and he dunks on anyone at wipp. Also defensively a tank.

Ok I forgot the prime set. Malone an even Garnett areost expensive that KAT for sure.

The kobe part are not agree with you. Kobe requires a long long time, and we can assume that time is money.

Ruby Taco / Opal Eaton = both 1 million to lock in at the time.

There’s an auctionable opal Zion that is cheap af and better than the Next lockin reward and yes…he catches body.

And has the 2nd fastest jumper to wade lol

Maybe you can call it the most exclusive lineup with kobe. Expensive sounds like Mt or money.

Or how much time it costs to upgrade Kareem to pink diamond? Maybe the same? The early Evos were a pain in the ass.

No, not even close

Because the same reason that I didn’t put the freaking isaiah thomas, dominique wilkings or even Jason Richardson that time compete with kobe (especially jason richarson) in time consuming but they are outdate at all.

Rudy Gay if you are good you need three/six attemps for 12-0 and restart immediately fail. Approximately 4hours per round we have 24h per player, less that a hundred hours in total. If you are bad, you have two options searching with a friend (time reduce a pair hours per each maybe must win a game or two) or you can try a million of time without success.
In addition, Rudy Gay is easy to obtein at that moment only 5 rounds of 7,8,9,10 and 11 wins aguardable even you are not so skilled.

Ok got it. I know about the the 12-0 selfmatching ofc.

I was about to mention Gay too, as you say he is similar to Kobe

however, if we go by grinding I guess GO Wilkins (1000 TT offline wins) deserves an honorable mention but the winner must be GO Jason Richardson …

Wilkens has the evo, ofc not up to date but similar to towns status.