@Petravork has been called up to the Majors

And I can’t even join him as an XB1 loser.

Why leave the site? I’ve been on MLB The Show 18 for the past 2 weeks but kept active.

He hasn’t even commented on this thread yet. 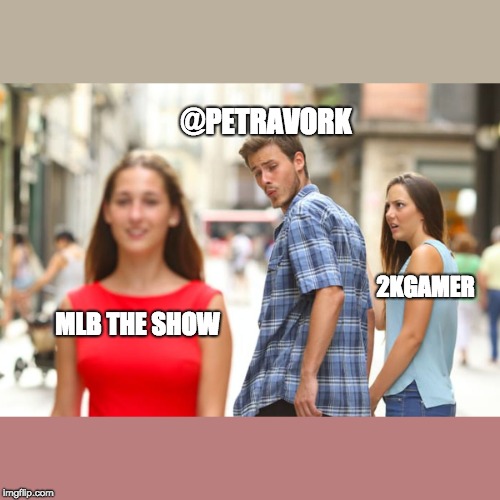 I installed The Show this morning. Diamond Dynasty seems miles ahead of MyTeam. Problem is, it’s baseball

@Petravork you get this type of pack luck bro? https://www.youtube.com/watch?v=ukswJfQXswU

Dude I would love Show Ultimate Team but clowns keep it away from XB1. Baseball cards are the OG of sports collecting it lends itself perfectly to this game mode

I am here for you forever. At 2k gamer and I will be back in 2k20 to FEAST and BEAST. But I aint goin anywhere on the site tho, its good to cut up with the homies.

I wish nothing but happiness for you guys over at the Show. No hard feelings here, we can still be friends.

I might get shanked in a dark alley for saying this…

But sometimes I wonder if the game mode would be better if the pack odds were MUCH worse.

It would force people to carefully choose their cards based on who they can afford. I remember for most of the year in 2K16 All Star 98 Magic was like 900k! No one but the biggest spenders could afford him, or at best, he was the only good card someone had. But he was super rare and when you faced him, he was a nightmare to deal with. It sort of made those cards more special. Now pretty much anyone and everyone can get their hands on cards if they really want them. You just see the same squads over and over.

Is there a database site for The Show like 2kcentral?

I was thinking like muthead.com maybe there’s a showhead.com but since I’m at work I decided not to check.

I think its called daddyleagues

The good thing about the show is you know the pack odds are so bad, no point in really buying shit.

With 2k at least there is a glimmer of hope.

What are like the highest pullable cards right now in the show? Or does it start off like MyTeam where everything is low OVR and they slowly build it up?

I always think it would be fuckin’ badass if there was at least one super rare pullable card, might sell for millions but is like a 99 OVR card pullable on day 1. Probably doesn’t make sense revenue wise but just the thought that you could have a 0.00000004% chance of pulling that card is exciting to me