I was Today years old

When I found out David Aldridge and Lamarcus Aldridge are cousins

I think nobody knew that lol

I did. Heard him say it during one of his sideline reports.

I’m almost certain they are not

LaMarcus Aldridge Responds to Charles Barkley: He ‘Talks Trash About Everybody’

LaMarcus Aldridge had just stepped off the court after a domineering performance over the Houston Rockets on Thursday night. Portland Trail Blazersfans were justified in chanting “M-V-P” at Aldridge after he poured in 31 points and snagged a staggering 25 rebounds, plus two steals and two blocks.

Naturally, TNT sideline reporter David Aldridge wanted to talk to LaMarcus after the game, and not just because they share a last name. After asking him about the epic performance and his team’s strong effort, the reporter lowered the boom with an assist from Hall of Famer and TNT studio analyst Charles Barkley.

That can’t be true lol 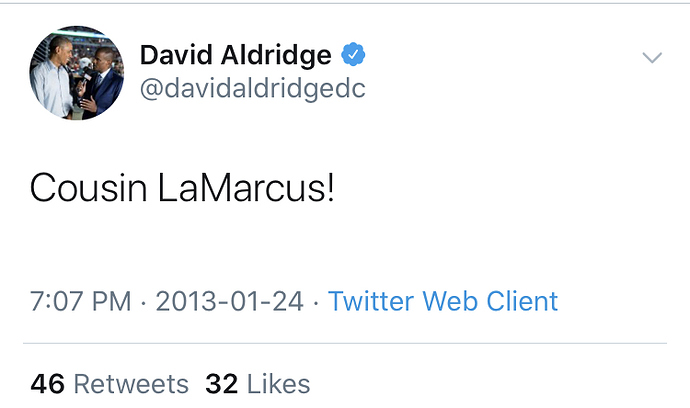 Nobody got time for David Aldridge in 2K

We always tryna skip or fast forward thru Aldridge

I think he’s joking because they have the same last name.

Yeah he says this all the time. He’s joking. They aren’t related.

I saw that, couldn’t tell if he was being serious or not. It’s probably something they both joke about.