How will LeBron's career end? Will he win 1 more ring?

Not trying to shit on LeBron because it’s easy right now. There is no clowning on a player who has a legitimate argument for being the best player in the game at the age of 37, with NBA mileage on his body only exceeded by Kareem Abdul-Jabbar and Karl Malone. He’ll pass Malone this season, and he’ll pass Kareem by the end of next season. (Talking total minutes played, season plus playoffs.)

His career still seems far from over, but at least the prospect of LeBron winning another championship as a Laker seems decisively over.

And, next year, I believe that the Lakers will be locked into Repeater Tax, as they will have paid Luxury Tax the preceding two seasons.

So next season seems to offer even bleaker prospects for improvement than exist this season.

The season after next, Westbrook’s contract is over and there is some opportunity to re-set. Enough for LeBron to stick with the Lakers? And how much will he demand, and will that be worth it?

Doesn’t seem possible for the Lakers to rebuild a championship roster within LeBron’s body clock, not to mention how AD’s will turn out.

I guess the oft-cited possibility that gets thrown around these days is that the Cavaliers will have a trio of Garland, Mobley, and Allen, and tons of money to spend.

This article says Westbrook almost walked off the court when he got benched during last night’s loss to the Pacers.

One factoid that jumped out in the article was that his monster dunk on Gobert was the his first and, so far, only dunk in calendar year 2022. 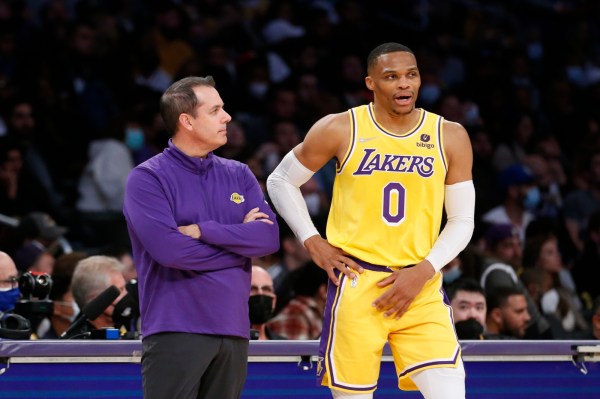 How Russell Westbrook and his Lakers coaches arrived at an impasse

The Lakers’ conversion to small ball has come at Westbrook’s expense rather than his benefit, igniting frustrations.

I think, yes, he will, or very likely could— but I don’t think it’ll be with the Lakers. Probably the Cavs like you mentioned.

Funny how those of us Lakers fans who were critical of Russ’s fit at the beginning of the season were so maligned in that other thread as “casual fans”, not smart, etc. Dark days ahead for the Purple and Gold IMO.

Funny how those of us Lakers fans who were critical of Russ’s fit at the beginning of the season were so maligned in that other thread as “casual fans”, not smart, etc.

Oh really? The really rabid Lakers fans who did nothing but try to rationalize away any critique of the team haven’t been around for a while. Thought that it was pretty much universal that it was unlikely to go well. Probably was going to go poorly.

Like I said, I basically straddled the fence early on. Felt like it was really obviously a bad fit but figured that they could make it work significantly better than it has. Maybe if they were totally healthy, it wouldn’t be nearly as bad as it’s been, but by now it’s clear that the ceiling is low, even if injury isn’t more of a burden to Lakers than to others.

I’m surprised that Westbrook is apparently disgruntled, or at least not gruntled. I felt like the LBJ - AD - Russ summit had to have included talk about how he might sometimes not be on the court in crunch time, and even that he might come off the bench sometimes. And that Russ would be cool with it because it was a chance for him to be relevant to the championship race.

I guess Russ is Russ but I expected more self-understanding coming from a dude who was around to witness this firsthand: 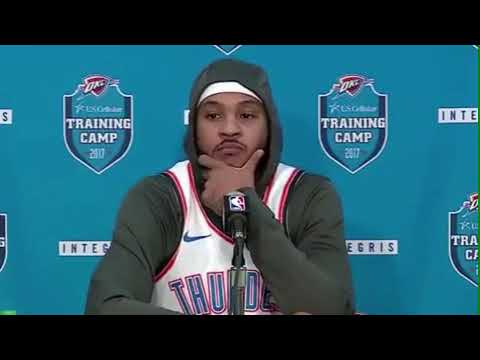 Especially when Carmelo is right there with the Lakers as a reminder. And as a role model for coming to grips with knowing how he fits in.

Would’ve said the same thing about Carmelo, but he came around to reality. I guess it’s just a process for guys who were apex team leaders for so long. Maybe Russ still thinks of himself as a 1B, from which “role player” is a mighty tumble.

lbj is probably go to hollywood after bball. Acting and stuff.

Whether or not he gets more into acting, seems amongst other business endeavors, he definitely wants to get into media. And going to the Lakers dovetailed with that, as would retiring a Laker. Think he can still be seen as a key figure in Laker lore, but I wonder if that aspect of his legacy and how it might contribute to future endeavors weighs against the aspect of where in the GOAT pantheon he stands.

Another factor is the whole Play with Bronny thing.

Slim chip chances this year for Lakers, it seems.

They could turn it around possibly, if they maybe package Westbrook, THT, ‘28 first (unprotected) for Wall and Gordon. Then Wall would have to be somewhere around replacement level or a bit better. Gordon is always solid. …Westbrook would probably get to stay in L.A., dunk in his driveway…

Lebron’s career will probably end with a thanks from the Laker’s fans for passing Kareem in their jersey, keeping it in family, and of course for the bubble championship. However, he will probably be seen going forward as the worst GM in Lakers history.

Honestly, idk if I’m taking that Wall trade if I’m the Lakers. You haven’t seen him play more than 50 games in what now seems like almost 4 seasons. Westbrook has fallen way below expectations but with Nunn and AD back I still think they have a chance out west if they can get their defense back on track

No, Bubble chip was the last for Lebron.

They could turn it around possibly, if they maybe package Westbrook, THT, ‘28 first (unprotected) for Wall and Gordon.

That could be a serious change. Probably more THT for Gordon if Gordon can keep shooting near how he’s been shooting.

Tough thing is that, if it’s not enough, it extends timeline another year, in terms of making big changes. Westbrook has one more season on his contract, Wall has two.

And if then their out a 1st round pick, and no THT but have Eric Gordon. But Eric Gordon’s contract goes through same season as Wall and pays him over $20M at the age of 35.

But aside from a deal for Wall, I can’t imagine any other way to move Westbrook, much less get back player(s) who will be a better fit.

Westbrook has one more season on his contract, Wall has two.

My bad. Both have a final player option year for next season.

The Lakers need to stop trading for old men.

When a “win now” team building goes wrong, expect 3-4 sub-par seasons after. So Lakers fans not only have to hope that they somehow get to the playoffs and actually advance a round or two, they don’t have anything to really look forward to in the immediate future if it doesn’t pan out this or next season.

Of course he will win another title , it’s lebron !! Next year it will be the Lakers SupraSuperteam

They could be sub-par by Lakers Exceptionalism standards, but they definitely do not need to be sub-league-par.

But I sure wouldn’t bet money that they’ll be much above par, unless I got really good odds.

These last two years they’ve really stretched the limit of building a top-heavy team of “superstars” and filling in almost the entire rest of the roster through free agency. Last year, was already stretched but it worked out and they didn’t stretch nearly as far as this year.

It’s good for the league for this sort of team-building to fail. Same goes for how the current Nets team was built.

Trade Deadline come and gone and no moves by the Lakers. Nothing big was possible except to complete the second leg of the Westbrook-for-Wall double-reverse, but there were rumors of small deals involving THT to make some marginal improvement (possibly).

Y’all have seen all the collective despair and Schadenfreudistic clowning after the thrashing by the Bucks and humbling by the Blazers.

Can’t do anything now but maybe pick up someone on the buyout market, but who the fuck decent is choosing to go to the Lakers dumpster fire?

And Westbrook still has his $47M option to exercise for next year.

A buyout I don’t think would leave the Lakers with any ability to really improve, and aside from minimum and exception slots, there’s no cap space for the Lakers to use.

Only new possibility that opens up is from being able to deal a 2nd future 1st Round pick and Westbrook’s contract being in its last year. Can move him, but are the picks valuable enough to take more than undesirable contract(s) back in return?

As per all the above, Lakers seem fucked in the short term, unless maybe LeBron and AD can emotionally bully Westbrook into surrendering a ton of money in a buyout, just to escape the torment.

Lots of chatter has been about how ripe the Cavaliers look for a second Return of the King. Seems logical for LBJ to switch tracks on his legacy-writing to go back to Cleveland, but was listening to some podcast, can’t remember which, and someone brought up a good point: Dan Gilbert finally has a Cavs team that has hit the jackpot of having a contender with young players on a good salary cap timeline to keep the momentum building. Finally can build a true title contender that does not involve LeBron in any way. Why take LBJ back and give him all the glory?

But, otherwise, the Cavs are set up nicely to be part of a big trade next year with Kevin Love’s salary and/or Markkanen’s and LeVerts. Several big time young players on cheap contracts. And all their draft picks from 2023 onward, including a few extra 2nd rounders.

And also set up for big free agent acquisition the year after. Darius Garland will need to be paid big, but even after that, they have room to sign a star while still keeping their star young trio.

And, now, even Joakim Noah thinks of Cleveland with conditional positivity. 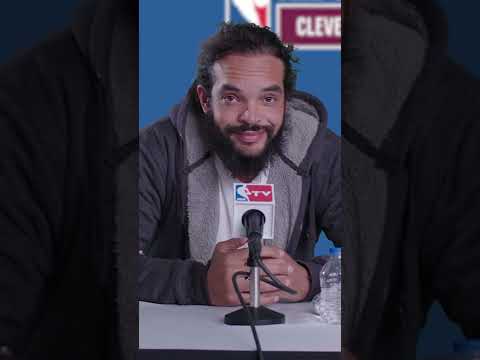 Saw this today in the Warriors sub and post was titled: 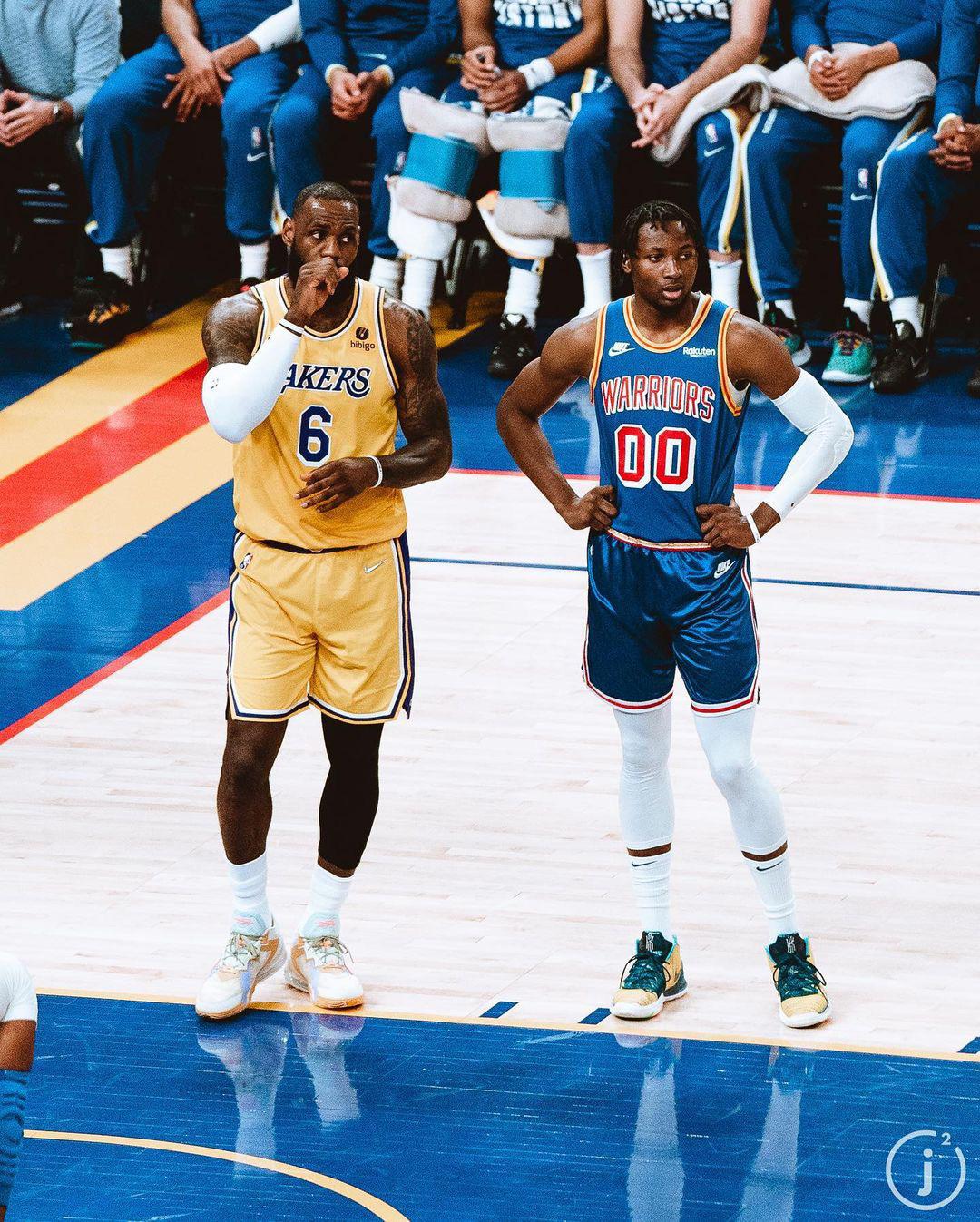 It’s WILD that LeBron is 37 years old, and only a few human beings played more NBA games/minutes than him and only in ground-bound positions, and this dude is putting up these averages this season: