Is he worth the 200k he’s going for rn to try and make a run for this Wilt? I need a center badly and most other budget guys seem way too slow or are missing important badges. I don’t really wanna throw down 300+ on Bol Bol waiting for a Shaq or Hakeem.

He is cool…Very fun to play with…
Sold him back just because wilt is coming,and he kinda feels clumsy

Get McGee or PD Embiid

I played some guy today that ran Tacko at center with an all bronze bench and some other budget beast cards. I had I think 11 Opals on my squad…so my point is EQ Tacko is a MFin joke. F that card it is a glitch.

With that being said Im sure PD Manute would do the same shit.

I didn’t like the card at all. Especially not for 250. Like bruh said up there, he’s too clumsy

Idk about MTU, but unstoppable in TTO. Lord is Tacko the Assblaster 3000

He doesn’t get abused with that 50 speed?

Also how is Pd Oden?

Harry Giles and Joel Embiid are two centers you cannot go wrong with. Joel Starts for me and Giles comes off the bench. Dirk also looks solid. I used Camby before Giles and loved him but didn’t like his release/free throw

He’s so big that it doesn’t matter. I start bolbol but if it’s between Tacko and manute, it’s manute all day.

Trust me Embiid not having Pogo Stick is far worse than Giles not having hustle rebounder but he’s good enough that it doesn’t matter. He jumps WAY slower than hof and gold pogo stick players when I’m spamming the block/rebound button

PD oden is a beast. Fast, and amazing release if you are left open from 3.

Tacko is worth the 250k now, but won’t be once you get Wilt. I have him coming off the bench to battle other’s Tacko, but he can lose the ball pretty easily in double teams and he can be made to pickup his dribble pretty quickly at times. His shot is money though and he boards better than Kareem has ever done for me.

Tacko is good for this: 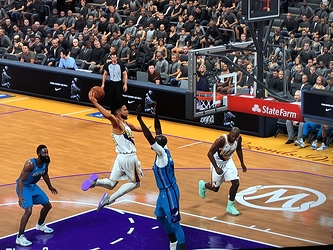