I know this has been beaten to death, but it really is crazy how they don’t update MyTeam at all.

Our content is just packs. Give us something else to do besides what’s on there. Update TTO with other courts. Give the single player crowd a new domination. Give us an online season league (within MyTeam), that reward teams that win it or make the playoffs. Give out more exclusive “non auctionable” cards that are specific to certain achievements.

Something. Give us something else to do with this game.

There are so many different ways they could update this game that would keep us playing all year. “Moments challenges” for 2.5k is all we have to look forward to.

They will actually drop random cards in TTO.

As for leagues and additional gameplays,
I think they won’t.

Honestly if they gave us an official response regarding SL challenges that would be great. I don’t trust anything Robbie says, and all he says has been “stay tuned.”

How long has it been since Roy’s been out? Too long. 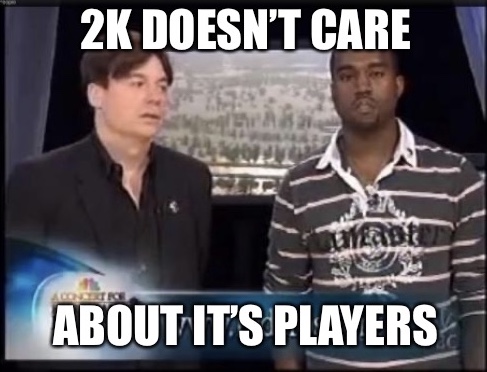 Was previous years game modes as stale as well… after finishing domination, I am forced to play MTU because lack of 5v5 modes

Welcome to the Community!

Welcome to the site!!

Yeah you can learn alot of stuffs here, just feel free to ask anyone

Great group of people on here. Welcome to the madness!! Haha

I miss last year TTO boards so much…they were

… why do they do not updates this year ?

2k has made it clear they want you only opening packs and collecting cards. But they don’t give you anything to do with them

They gave up already on this years game all we getting from now on is good old micro transactions Packs . They don’t believe in giving out cards for people to earn/Rewards and if they do it’s ones that suck ass and are already out dated or are about to be in a quick sec.