No idea what he was thinking but as the current reigning MVP, he should know better.

One thing is sure, Morris won’t forget that cheap shot Jokic put him. 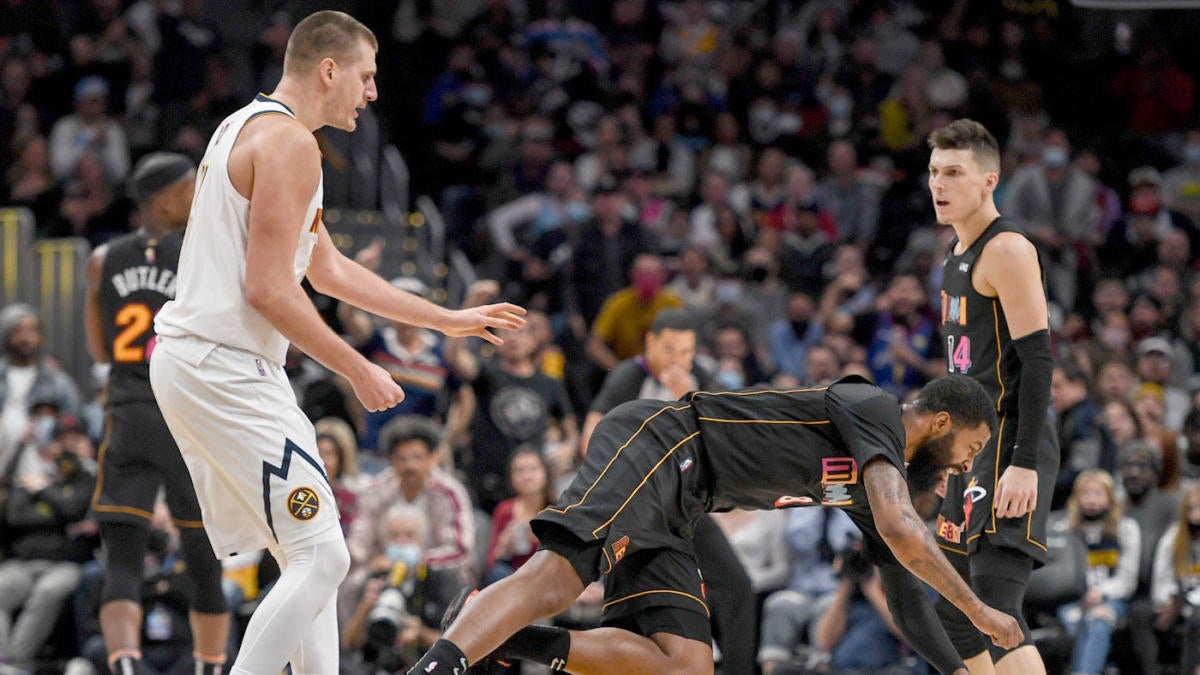 Nikola Jokic ejected after laying out Markieff Morris with cheap shot in...

Jokic supposed to be scared or something? There’s a saying many live by I won’t start something but I sure as hell will finish it, Morris started that Jokic finished it .

No but it’s the cheap shots that you don’t see coming that are the ones that can harm you. That shot he took on Morris was uncalled for because he did it in a cowardly fashion when Morris wasn’t facing him and for the record, I’ve never liked Jokic because he’s dirty but that’s the first time he’s been caught being dirty and there’s tons of other NBA players who are dirty and but they haven’t been caught yet but in time they will.

Jokic lucky he wasn’t playing when Moses, Laimbeer, Kareem, Shaq, Hakeem, Ewing, Sabonis etc were playing because one of those guys would have cleaned his clock.

You can’t take a cheap shot on someone then when he does it better get mad. Morris gave the first shot Jokic returned the favor.

…but Jokic wasn’t looking when he caught the cheap shot from Morris. Why is it ok that he did it, but when it’s returned it’s “cheap”?

And Morris a clean player ? If you gonna take a shot at someone look out for the retaliation it kinda comes with the territory. those same players u named would have done the same to Morris for his shot it goes both ways

The bully got bullied tough luck.

@SportsCenter
Nikola Jokic and Markieff Morris were both ejected from the game after the two exchanged hard fouls. https://t.co/AtOklXIU5k
1 Like
zhilla November 9, 2021, 5:13pm #8

Really? Jokić dirty play? What the hell is wrong with you? 🤦

Morris brothers are one of the dirtiest players in the league (besides the annoying little rat called Pat) and the guy had it coming. Jokić didnt push him enough! Still remember how he was constantly provoking my guy Luka last year. Anyway, well done Jokić, next time push him even harder!

Morris literally ran into him when he was gonna pass the ball. What did he think was gonna happen

If someone hits you, u can either choose to walk away or hit em back….u can’t expect to body someone then walk away like nothin happened.

Next Nuggets-Heat game is gonna be reaally dirty. 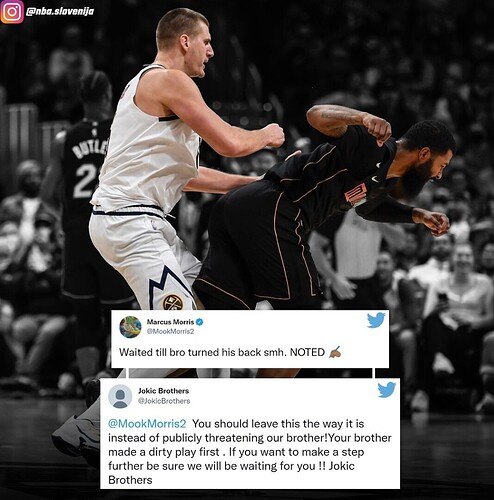 Even the brothers are getting in on the action 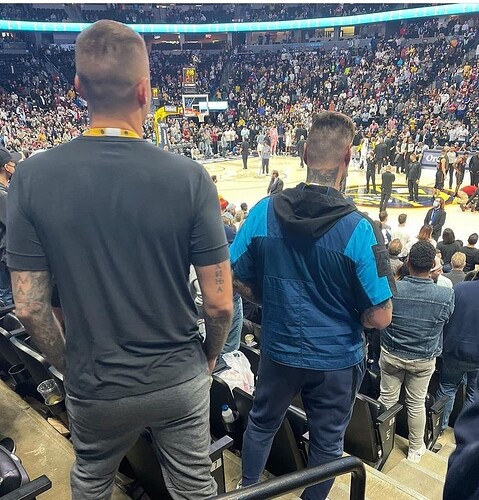 First real post in a long time just to say

If you gonna play dirty, then you shouldn’t get to dictate how the other party responds. For the lil dirty things Jokic might do, he definitely isn’t going out there with that being his M-O. Hopefully markieff learn to do that to guards or something. that shit really weak anyway lmao

Mainly because someone like Vlatko Cancar should’ve been put in to retaliate for him.

NBA should suspend Morris at least as much as Jokic and explicitly send the message that the days of goonish instigation are over.

I want to watch basketball. Part of me enjoys the scrapping but it’s actually stupid as fuck if it risks injuries for the best players.

Cut that shit out. If people want to see extracurriculars in the mix, they can watch hockey, football, or go straight to MMA or boxing.

I dissagree, the game became too soft as is it anyway, how did they survive in the 80s/90s then lol

And our Vlatko aint much of a fighter tbh

I do enjoy the fights but @HarryLundt has a point.

No need to fight to impose consequences. Just a running shoulder block, or an “accidental” clothesline, or “accidental” elbow.

Nobody actually fights in the NBA. Even if they tried to, it’d be broken up almost instantly. And almost nobody ever even tries to.

You can’t allow shit like what Morris did unless you want things to spiral further. There will be more enforcer bullshit with more risk of bad injuries. And also more “fights” that are just stupid.

99% or more of all NBA “fights,” if left to go without interference, would basically end up the shittiest MMA fights ever. Most wouldn’t even make YouTube rando fight reels if it weren’t for the NBA angle.

Trust me, I hate these dirty bastards like Pat and Morris brothers as much as the next guy but I’m just saying that it wasnt wrong of Jokić to retaliate back to Morris, he certainly deserved it.

I see all these sport analyst talking bout how Jokic was worse cause he did it behind the guys back….yeah maybe he shouldn’t have stoop to that level but, if a stranger walks down the street and pushes you then walk away, who am I to say it’s wrong for you to put em on their ass.