Well…As mentioned earlier, 20 Brons out there partying so why not? Inv Kobe is still very rare, We need a god damn Frobe. Love Ruby, Pd is outdated. Everyone has everything so we spend for the looks

And give him an extra badge like Kobe mentality

That would be awesome tbh.

Nah GOAT Kobe should be low cut 24 Kobe. That was the era that is most synonymous with him entering the GOAT conversation. He got his first MVP, He got his first FMVPs and first Shaq-less rings. He passed MJ in scoring as 24, His first 2K cover, he of course had the legendary last game as 24 and he his Mamba nickname that is basically his entire legacy (Mamba mentality, His team Mamba academy, the Kobe 6s with Snakeskin, etc). Kobe was way more iconic with the low haircut and number 24. Even that scoring outburst in 06, he was still number 8 but the fro was long gone.

This is MYTEAM where the gods of olympus are renamed as: Yao, Tacko, Shawn, Bol… WHY SO SERIOUS?

Because I’m sick of Frobe. I don’t like the player model they always make him look like a rat lol. I also did not become a Kobe fan until the rebrand. Him and Shaq were villains to me (I loved AI)

I want that Goat Frobe to throw some airballs in unlimited !

You don’t need Kobe - at least with current game mechanics on next gen. I spent fortune on DM Kobe’s - hoping that next one will be better - but they all are totally unusable at current stage of the game. Too slow - due small player model.

Number 8 Kobe is where he started and was a starting point for his legendary career. 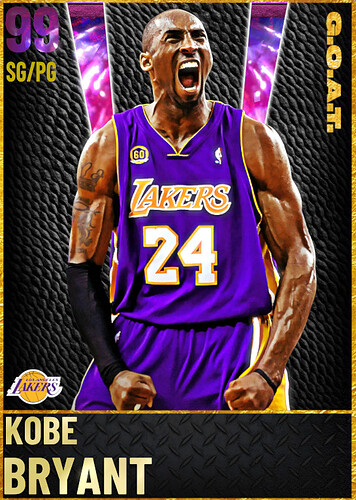