Invincible Bird will be a Wednesday drop and won’t get an End Game/Anniversary.

My guess is Luka and Kareem on Friday, Bol Bol and Thon next Tuesday.

Bol Bol and Luka for the West seem like locks, as does Kareem for the East.

I don’t think that we get anyone shorter than 6’10” for the final card. Manute makes sense to pair with his son, but Thon or Ferry are also options.

Bird would be nice, but I am also okay if he gets a cheap invincible card that ends up being 10-15K by the start of the final season.

i’d like to see thon, but for some reason i think there will be at least one non-meta card and it’ll end up being the gate keeper like bill russell is for wilt.

Hoping for a Penny or PF/SF Endgame KG but not likely. 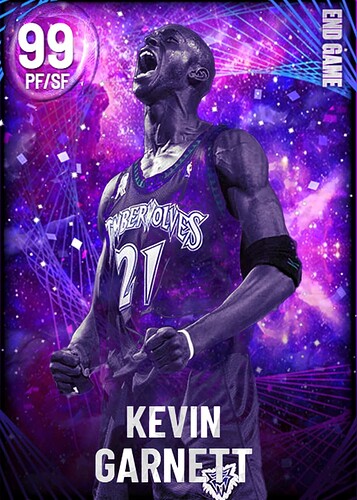 Luka has to be Friday I would think

My guess is no Luka. Cannot improve his shot. Maybe he will get a lame EG as a reward next season. I would bet on Bol Bol and KAJ for this weekend with card release.

From a $ standpoint it would be dumb to skip a Luka drop. Skipping Bird I would get since he won’t excite many under 40 gamers, but not giving Luka the copy and paste treatment would be shocking.

If I had to guess: Since Luka kind of sells packs:
Luka
Kareem
Bird
Bol

Bol would probably go with Bird.

Bird I’d guess only because he’s the one big name besides Kareem left and Bird hasn’t got an Inv card.
Kareem has but he could get 2 one Lakers and one Bucks.
Heck we could even get someone like Hedo and Bol in a drop and Hedo being a PG card.
Wouldn’t shock me.

Well i wasnt wrong about kareem and luka at least

Unless we are completely Bol’ed over on Tuesday, the final drop could be a dud.

That would make most of us quit 2k for good.