Explain your name... for my sanity

I’ve held this topic in for as long I can, idk neither care if a thread has been made on this… But I have been extremely curious as to what some of y’all’s screen names mean or where they came from (especially @Petravork) - I’ll start

My first name is Rodney, so I sliced the Ney out and added squad because it rhymed (I was a youth). I also thought the idea of the “RodSquad” being one person would draw people to my then YouTube channel (it didn’t lmao). I had a channel where I did gaming podcasts for 52 subs every week. The G comes from my last name

My first name is Rodney, so I sliced the Ney out and added squad because it rhymed

Love this topic. Have wondered the same for ages too

My name is Sam. My buddies wanted me to play the game Overwatch one day and said you can be “our SixthManSam” and then I took the nickname and made a YouTube channel because it relates to basketball more lol

lol same here. I try to figure them out. I feel I’ve got a few of them figured out, but it’ll definitely be interesting to see if I’m correct on any

I chose BigDan8 because Big Dan has been a nickname for me my whole life since I am a big man lol. Chose 8 in honor of Kobe.

I am named Gobles after the turkey from south park

my real name is clark griffin, but in the 100 the main characters name is clarke griffin. i figured id add the E to get a little more privacy but here i am

My user name comes from Slick Rick Da Ruler and 22 was my basketball number. I chose 22 because in the old NBA days the player that had their number first got to wear it in the All Star games. I went with 22 because no All Star in the East had that number and only one in the West had it.

Pippen had to wear 30, because Patrick Ewing had the number 33 before him and they were both on the East All Star team in 1994. 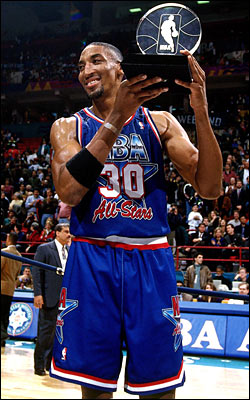 I was just so sure that not only was I gonna play in the NBA, but I was gonna be an All Star and surely be drafted by a team in the Eastern conference.

I hope that you all enjoyed this history lesson. Lol

Freddie Delon Norman CJ miles poeltl. Would close out games. Was nuts. Their Nickname was the benchmob. Nothing fancy lol

Wait , you guys actually have explanations for your names? I didn’t get the memo

i remember how good that was. everyone forgets how good we were prekawhi. just couldnt clutch it in the playoffs like ever