With this in mind…

I bought a ruby Darrell Armstrong off the action house (cheapest up 18kmt) sold my sapphire for 6kmt and when I went to the evolution to see what it to took to get him to Amy, the card I bought was about 60% finished with Ruby already! So basically I paid 12kmt to get 3/4 of the grind done for me and after a few hours today should have an Amy Darryl Armstrong that sells for 80k

…I was looking at some of my EVO cards and thinking I’m just not going to EVO some of the auctionable ones any time soon, and that I may sell off before their fully-evolved states cease to be attractive.

I.e. I have Smits and I sort of like him but I also have Hakeem, Wilt, KG, Zo, Muresan, Shaq, etc.

And ~20K is a somewhat meaningful amount of MT for me.

So I might sell him before I evolve him to Amethyst, but with a very considerable amount of progress toward that.

And, if so, then I would like for someone on 2KGamer to be able to snag him for the headstart, rather than some random getting lucky.

In which case…I’ll post a reply to this thread and let people know:

Encourage everyone to do the same. Not only a way to do a solid for our community but also can be a way to have a better chance at getting a little more MT in the sale, if you have really substantial progress on the card.

Should go without saying, but I’ll also say: don’t lie about the EVO progress on the card. At the least, that’s gonna be a good way to burn rep here.

And on that note, as with any “transaction”: caveat emptor.

Also: NO BUMPING of this thread to call attention back to a listing you’ve already made. If it doesn’t sell, and you list again on the AH, then you can post about it again on this thread…hopefully for a lower BIN than initial pricing.

I didn’t know until today that it transfers. I got a Ruby sprewell that had all the 3s already made. There’s no way to check progression on auction house I guess?

I like this idea. The base Sprewell Ruby goes for about 11k, but then you risk it have 0 progression.
Great way for people to get a bit extra sale for their grind and for the buyer to pay a bit extra MT for time they won’t have to spend evo’ing

There’s no way to check progression on auction house I guess?

Nope, no way to check progress on cards in AH.

So my idea for this thread is that: those selling cards with strong progress can maybe get a bit of extra MT than they would be able to get, otherwise. And the buyer can pay for progress that they consider worth the MT premium. And just another perk for being on this site.

Of course: this only works if people are accurate and honest in reporting the EVO goal progress. So sellers should be careful in checking stats, and buyers should be cautious in who they believe.

I would say, if you’re going to make such a listing, and especially if you want to charge a considerable MT premium, then along with making your auction distinct and listing it here: post a screencap of the EVO progress.

Cool idea! But I don’t know who to trust these days lol

Until/unless it bogs down this thread with too much hemming and hawing, people should also feel free to post what they have and solicit others to let them know how much of a premium they’re willing to pay.

In contrary to other Classifies threads, though: NO BUMPING of the thread to call attention back to a listing you’ve already posted.

You can always trust me my friend

This is a great idea as long as people are truthful. Hopefully it benefits everyone.

@HarryLundt, you’re a genius for this one, buddy.

This is 6D Mahjongg.

I’ll start things off… I have this Sprewell I’m selling on PS4. Anyone interested? 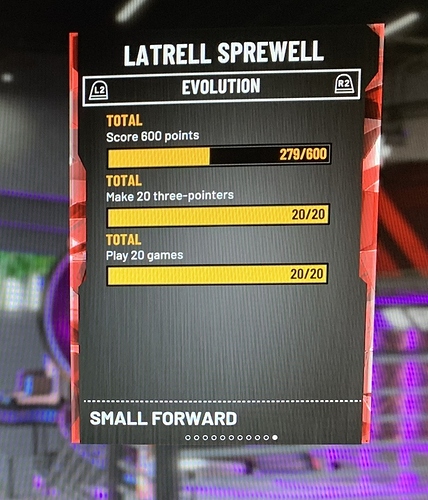 I might be, I have a Spree, but i dont think im as far along as you

Yup, cool little feature. I picked up a smits to flip and only need 100 points!

This is dope, wish I would’ve seen this before i sold my ruby sprewell this morning lol

Let me know if you want him… I haven’t listed him yet, just in case someone here could use him. I’ll sell him normal price… I just want a site member to reap the benefits.

Suggestion: @pancakes can at least eat a few hundo extra for a Shoe to unmistakably distinguish your listing from any others listed around the same time.

Great thread, might be selling a ruby starbury if anyone wants him