Yeah, now that you mention it, I don’t recall seeing the symbol anywhere on any of the cards we’ve seen. Cash pulled Westbrook a few times and you’d think he’d have a duo with Harden, but there wasn’t the traditional pop-up telling us to look for the other half, a symbol, nothing.

It could be that they weren’t in yet, as that was a dev build Cash was on, or maybe they just quietly canned them.

I could see 2K holding them till later, to make themes around and sell packs, lol.

In the myteam Facebook blog, they specifically mentioned dynamic duos

^ I just re-read it and it’s a footnote near the bottom. So yeah, best guess is either no base duos or they just weren’t in Cash’s build

Dynamic Duos : Ever wonder why Player A and Player B are a duo? Similar to the above Moments and Featured Packs, this section will tell the story of how two players came to be a Dynamic Duo within the game.

There’s def duos. Look at giannis and Middleton I think. On the bottom there’s some graphic that indicates those players hv duos. Other cards don’t hv that. Graphic is similar to like a slider. Like it slides to the right on the card when the duo is inserted in the lineup.

Got a screenie? I wanna see how it looks. I went through Cash’s vid again and I didn’t see anything different on Giannis’s card than anyone else’s and Cash’s big head was covering Middleton. I wanna know if I’m blind, lol. 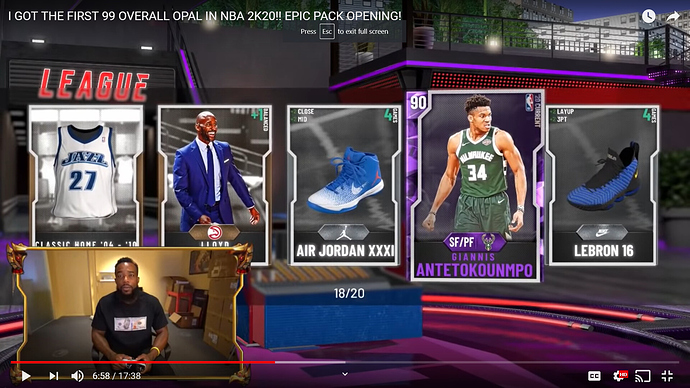 Hmm glad you put up the screen. I feel like I saw it on some card for sure. If I come across it again I’ll re respond

I feel like I saw that card on the blog post about myteam. That’s how the dynamic duo card would look like. But you’re right, in any of the pack openings I didn’t come across a single card that indicates that they’re a dynamic duo.

its on the shaq card

nvm I just checked, had seen it on phone and was confused because it just says “dwyane wade” in the corner of the card.

There in 2k20 but they probably won’t update them again.

That parts just a given at this point, lol.

Such a good idea but ruin because of 2k laziness

So are we not going to talk about how they didn’t drop the final Dynamic Duos packs for the first time… in years? 12k MT packs that have every card in the game in them, that also permanently drive down the market?

Not too much of a fuck is needed to be given about this, I just thought shit is wild. Completely forgot 20 existed after I uninstalled

They are just going to remove everything from now on like the duo packs. Now people will have to buy 2k21 because the market will be so inflated with no cards.

It’s a marketing strategy they just want people to buy 2k21 and move on from 20. They want to eliminate players on older games.

Yeah its very wild, I hope the end of 2k20 doesn’t set a precedant for 2k21 and beyond.

Understood but they’ve dropped them, for as long as i can remember