Me and my friends were playing Rec against this No xSaucy guy and his boys. Here’s the picture of them 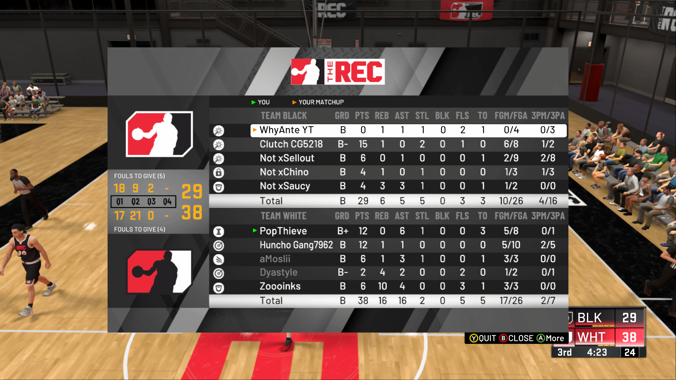 During the game we was up since the beginning and he started spamming everyone on my team with party invites and messages. One of my guys joined his party to talk shit and No xSaucy basically booted him offline.

Excuse my language but it’s so fucking corny that guys like this guy does shit like this just so he can try and remain a 99 overall this year lmao. Smfh

How did he boot him offline?

Oh wow, so they then use your IP somehow to kick you? That shit’s crazy

2k players are some of the most toxic try hard gamers on the planet.

Never join anyone’s party especially after one you beat them. And two if you’re talking shut to them

once you join someones party they can see your IP, if youre destroying someone dont join there party lol

@508G37 he was from your area too, joined our party after and my whole internet went down for a few minutes. Was real random that he was near you and me.

What? You think i shut your internet down?

I’m being accused of hacking someones internet when I don’t even own a PC and my computer knowledge goes as far as Microsoft Word and Excel. Last time we were in a party was in 2k18 during that tourney maybe? Honestly I dont even remember being in a party with you. Next time hit me up in the DM before calling me out and don’t wait over a year.

pfft thats what all the master hackers say

Yea thats kid shit. Y would I have reason to pull shit like that, especially in a tourney where everyone would know? Why is a mod out of all people calling me out? Lmao this is some bullshit bro.

@OGxSuave that was your tourney, did I hack you too? smh

Its all good. Im gonna catch a ban anyways cuz mods are untouchable

He wasn’t accusing you. He was just saying this No xSaucy said he lived in the town you do

. I think you misunderstood bro. We know you didn’t do it or even thought you did.

Idk man thats fishy af, its a really small city and I doubt anyone else on here lives there. I still dont want him dropping my location, ppl already know what I look like and what car I drive.

The way it was worded before was for sure an accusation.