Can someone please help with offline play

I simply can’t do anything against the CPU

I’ve won 7 games in dom and now am on an 8 game losing streak against the cpu. They seem to have gotten stronger to me.

Feels like every player has HOF clamps, pick pocket, brick wall, you name it 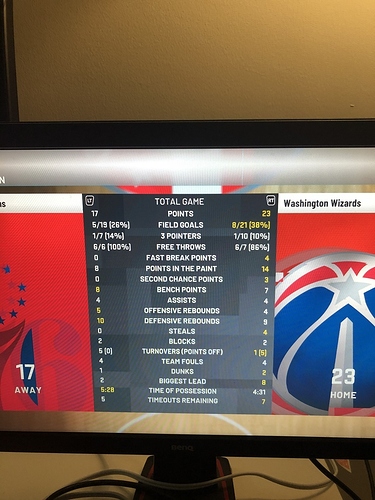 This is what I’m dealing with. The hardest sports game ever made

rim run, off ball against non shooters, don’t shoot at all, use give 15 horns dive from pistons playbook

Bronzes light you up in dom, so cant sag off. Rim running results in double digit steals and blocks every game. Just lost by 20 to the Wizards. They couldn’t miss

Any effective defensive settings? They seem to be completely broken

sag off of non shooters not shooters, play a zone, rim running works if you play a 5 out offense

It’s so not fun. I don’t think I’ve ever lost this many games in current, and almost never shoot even 40%

Does that pistons play work? I’m playing the Pistons on pro in the back to back challenge and it’s almost always stopped

The YouTube Jake Mason has a nice way to score against the cpu on his channel.

If you spam the same play the AI will stop it after some runs on higher difficulty. True artificial intelligence;)
Try to mix it with floppy, a simple give and go, early offense and dynamic play 1 and 2 ( preset plays ).
They all work great offline when you mix it.

Guys are giving you sound tips. You are right that it no fun. Broke game is broke.

I gotta be honest… I absolutely hate the shooting now. I was just getting good with the sticks and they add fucking speed to it… What the fuck?? Why does it matter how fast I pull down the stick, on top of aiming it? I just played a game of Unlimited and got destroyed because I tried using the new shit for the whole game.

Is there something I’m missing here…? I guess I’ll try going back to square but I might just take a break from this shit… the game supposed to be fun. It used to be fun, now it’s like a chore. Keeping up with the Joneses and working the AH, grinding for XP and learning new ways to play every week…

Thanks for all the tips in here. I been trying the sfs method and it’s not getting easier lol. Thank god I picked AI as my starter.

I just don’t get how people can still be struggling with the computer. I’ve been blowing out the HOF Dom teams by 30 practically every game using emeralds to complete agenda challenges.

Just don’t take jump shots. Run some pick and roll sets, call for some manual cuts, and clamp them up with on ball.

They are so easy to predict. Use bump steals to your advantage. I hate the terrible shooting thing, too, but the computer is trash. Treat them as such.

Regular domination is whatever. But historic and especially All Time is a joke. you literally have to play perfect the whole game. Like someone said it’s a game and should be fun. It shouldn’t be a chore to do. I’m not saying make it easy but there should be a balance. I shouldn’t have to shoot 85% to beat a team that’s shooting 90%. That’s ridiculous. And insanely unrealistic