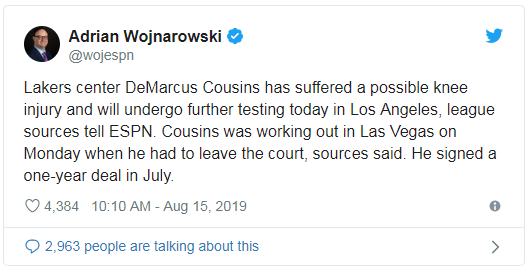 Annoying but honestly it could have been worse

It could have been Bron or AD

I guess that settles who’s the starting center

I never really understood the hype behind his signing because he was pretty bad with golden state. I get that it was low risk high reward type of thing though.

That being said this in all honestly helps the lakers if it means Boogie isnt closing games and AD plays center more.

He has been really unlucky the past 5 years. I really hope this works out for him.

Honestly I was so happy for him playing in NO with AD then he left, but I’m happy to see him on the Lakers.Hoping that he gets healed up and can play. He may not be what he was with the Kings but idc. Injuries suck and ruin so many careers. Would love to see him bounce back from this and same with KD and Klay from their injuries. I was upset seeing them get injured

Unfortunately, depending on the severity, Demarcus is Drose 2.0 in the sense that we may see flashes but hell never be close to what he was.

I hear ya there. Although D Rose had a great year last season especially that 50 point game, we will never see him become the same player. D Rose is one of my favorite guys in the league because he never gave up even after all those setbacks.

Supposedly he got hurt after bumping knees with another player so that’s at least a good sign. Shouldn’t be too serious

That shit hurts so bad.

Looks like he won’t be the same. Sad to see. But big men and those kind of injuries rarely end well.

His body was never going to let him be the same player.

He’s still going to be able to bully during the regular season but good teams make him a liability in the playoffs.

that depends on the bump

straight on yeah it hurts like hell but I got hit on the front/side while planted and tore a MCL.

And it’s not like he was some dominator , before all this injuries either.

Definitely depends on the bump but I’m just not as worried as I would be if it was non-contact since ACL, LCL, MCL, and meniscus tears are typically non-contact injuries.

Demarcus go retire tbh. Doesn’t hurt us cuz we got McGee tho