Best use to tokens?

I just started two weeks ago, not really here for online play. Just want to build my laker squad and run solos.

I got DM of magic and shaq, so those are the last two I need to upgrade (bench is full of PD and up lakers)

What’s the best way to convert tokens to coin? I can buy gold badges and QS them… but is there a more profitable way?

I was curious about what was best way to convert to MT. Basically: which tier of Badges were most lucrative.

But now that we can buy HoF badges, then I’ll use the ones I have that way.

Possibly, best way is buying high-end cards, and badging up with HoF badges then selling. But you’d need big MT to buy the expensive cards in the first place.

buy gold badge packs for 3 tokens. 460 tokens is 153 badge packs which if you quicksell everything adds up to 38,250 mt. not bad considering tokens are useless in every other way.

I’m holding for now and hoping they drop End Game token packs for guaranteed next week with choices. 2,000 here.

same i have about 1800 with a pretty solid new starting lineup for clutch time (80 hof mystic luka, eg kawhi, giannis, kareem, porzingis (not that anyone cares)). hoping for something fun before 23 but i seriously doubt it

Are they serious with this crap? 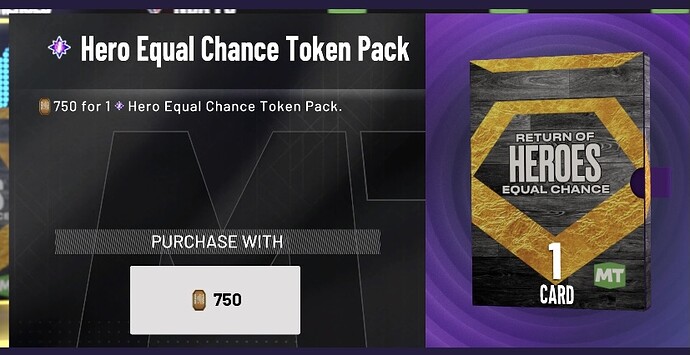 I really hope they put out something else on Friday for tokens. When I first saw it, I assumed it was 75 tokens and thought not the worse deal in the world. My mind could not wrap around the need for 750 tokens for one of these cards.
Who is actually running 2K this summer?

I thought the same thing when i first saw it then i saw ur comment and was let down. I hope friday we get something good but dont be suprised if its sone kinda superpack bullshit lol

Only way I can imagine someone using this is…someone who just started playing MyTeam and MT is super tight so using first 75 tokens on a DM is attractive?

Like, get a DM instead of clearing Emerald and most of Sapphire Rewards?

Doh. Yeah okay, so carry on with the clowning.

Just get rid of tokens in 2k23, those cards seem to get outdated quicker than any other cards.

In defense of the token market, I did use both Mutumbo and Oscar for quite awhile. Also the HOF badges were useful in limited. My 20 HOF Sabonis did well thanks to the token boost.

Fair point, I ran DR J for a while myself.

but 75 Tokens per badge when most cards now have all the badges they are dropping is pointless. Should have made it 50 Tokens each IMO, 4 for 200 seems fair, otherwise it’s 3 for 225.

they need to just have hof badges in the token market all year. maybe have them be random or have a weekly limit so we don’t see everybody loading up and making op cards too early.

there’s usually a good amy or diamond early in the year but then for 6 months the token market is basically useless.

another idea is non auctionable player cards from whatever packs are live.

A great idea would be if we could update prior DM token players to inv or EG for an extra 500 tokens. Even an additional 1000 token would be great. Would love an EG Mutumbo or Oscar. Even an EG Erving would be wonderful.