As title asks, which one is the best. I picked up Raptors but these plays take forever to develop

I didnt know that, im going to look into this playbook. Been using magic/wizards

The Magic playbook is pretty good

Has all the big hitters like punch 5 flare rip, quick horns, quick flare, quick floppy, and adds quick 2 fist 71 and a couple of others. Still has the same iso plays and fist plays that made the magic deadly.

Do you know which playbook is the carbon copy of this?

Gotcha. I was asking if there was a duplicate of the Hawks 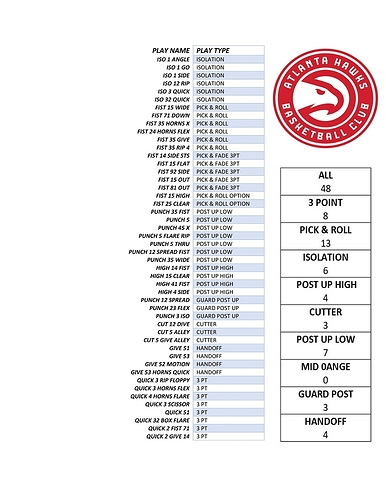 This will be my new playbook lol every play i run in magic book is in there so im set, just gotta learn some extras now

I run knicks what are yalls opinons on knicks

I heard Knick’s has some 5 out right??

No they don’t… They have spread PNR with some good spacing, but no actual 5 out

Cut Point 2 in Bucks playbook. Not a three-point play, but very effective for three.

Shooting guard runs to corner, center and power forward double screen down for him as he runs up for three. Takes about 3-5 seconds from calling play to shooting three

The Mavs playbook has a lot of 3 point plays