We’ve all seen these charts before. 15 bucks, build a lineup. The catch, you don’t play offense. The goal is to give up the least amount of points. One of each position. 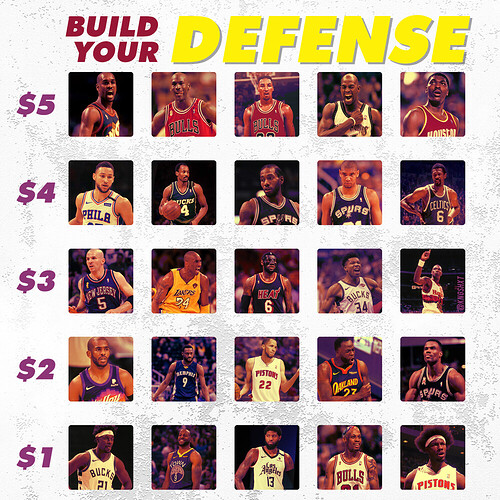 Payton as much as I love him is not better defender than Ben Simmons, let’s be real about it.

Tony Allen should be $3. Kobe is not a better defender than TA.

Rodman is the best 4.

Idk, man. Prime Kobe was insane on D. I think his offense just overshadowed that end.

I’m picking Draymond. Similar size but Dray has better versatility, higher IQ, and I think his intangibles like play recognition and callouts give him the edge over Rodman.

Payton is the only PG to ever win DPOY. I’d say he is pretty good.

True, I made GP the $5 option for that reason and I think he’s technically the best, but it’s really hard to replicate being 6’11. I should have made Ben the top option.

And got a dollar to spare

A guy who is tied for most DPOY awards of all time and was an all NBA caliber player for the better half of a decade despite averaging like 8 pgg is $1?

Listen I love Ben Wallace. Had the jersey and the hair to match, but those aren’t average Joes ahead of him lol.

I took a lot into account making it. I went with Hakeem at the top because his supporting cast was much weaker defensively and he was taller.