They love you when you’re winning... but when you’re not, you’re the target of racists and racism. This is a reminder that Pascal Siakam is a human being. Racism kills and hurts. This is ugly. garbage. https://t.co/GZd8V0dCir 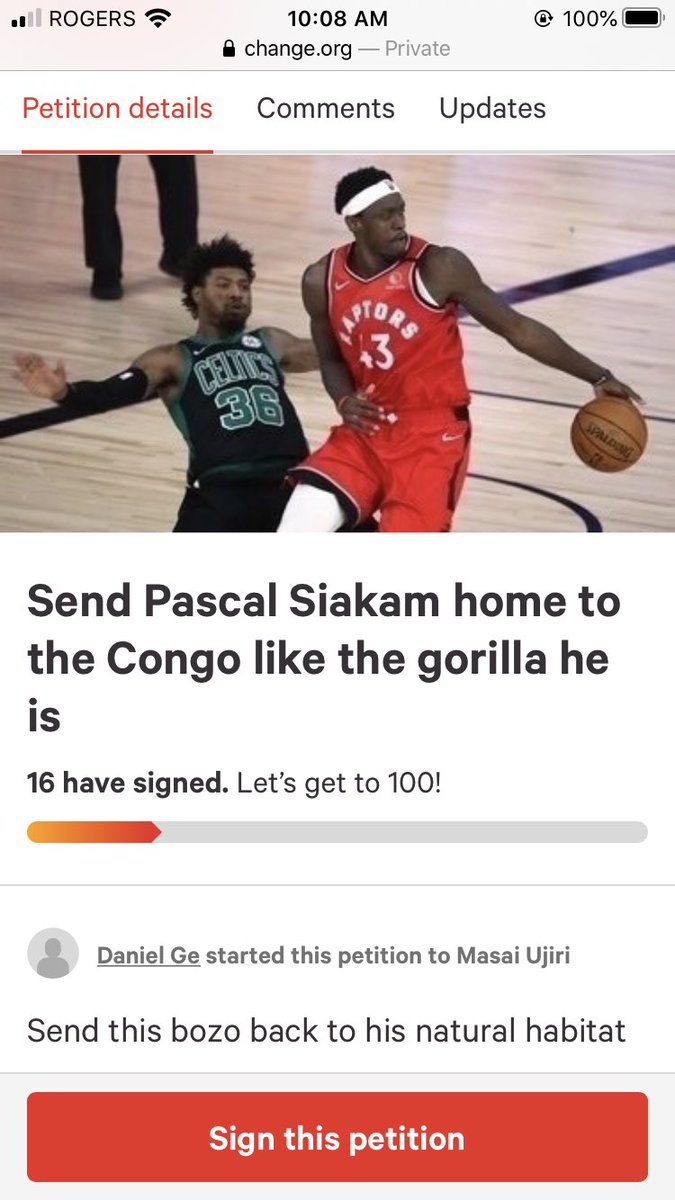 Disgusting. This isn’t a joke. This is hate. It’s racism. This is the type of racism Black athletes face time and time again. So stop telling athletes to shut up and dribble. 🙄 twitter.com/_rallycap/stat…

Siakam performance vs Cs were a testament to how elite the Celtic D and gameplan is against Pascal. They not only shut him down, he was demoralized.

Brown and Smart owned his soul, and his once effective spins to the basket were neutralized exposing the weakness to his offensive game.

That petition is definitely made by a troll and probably only pays attention to scoring.

This is sad to see. Highlights how athletes are treated even abroad. He had a bad series but helped get the Raptors to this point. They celebrated him when they got the Larry last year and treat him like less than a human being when he loses. This world is in a sad state with people like this.

Toronto native and I’m still rocking with Pascal. Will come back next year better 100%

This is not Canada, 16 people signed that petition. It’s definitely bullshit though

16 morons shouldn’t even get this attention either. Don’t blame Canada, is there any proof that Canadiens made and signed it.

I’m sure it’s some 13 year old kid. Still some dbags out there that make everyone look bad.

This dude who started this about to get doxxed, outed, and lose his job/credibility

And I’m totally here for it.

damn this is horrible, but the “canadian” headline feels kinda shit considering 16 people total signed it

Just want to point out that he is probably Canadian…

There’s a black guy at my work who is too productive and it bothers other employees. I spoke to him about evenly distributing the work load and he just doesn’t listen, he feels like he can do things himself and better. Well after about 6 months of on and off talking and reminders, he called my boss and accused me of picking on him based on the color of his skin. I was furious and actually thinking of going to HR and accusing him of being racist towards me just because I am white and his boss and he’s stereotyping me when I have to do my job and speak to him about things he does wrong. Should I go to HR with a counter complaint even though its petty? My boss told him that if he accuses me of racism they have to investigate it so he quickly retracted what he said. I told her that I’m ready to step down because the pay isn’t worth having to deal with shit like that.