Anybody get their Terrel Brandon?

How do you get him?

Had to finish top 500 in the qualifier yesterday. They have a banner saying they put em in the collection but I didn’t get one and I was 8 when the timer ended.

Didn’t get mine either.

Lmao. I got him. It’s under Unlimited Rewards on 2nd Page of Rewards in My Collection.

Can’t believe all it took was going 2-0 and stopping on Xbox.

I went there and it’s still nothing even closed app and came back played unlimited game to see if that triggered it still nothing. Maybe PS4 isn’t out yet

8? You must have been getting sweatyyyy

Naw honestly bro I really had bad comp and my mindset is once I’m up 5 I can manage the rest of the game. I practiced releases all that morning and if played somebody with 2 non shooting bigs or couldn’t green shots I ran 2-3 zone. Offense was balanced mostly scored off fastbreak.

I went 2-0 and ran into matty, and got Molly whopped.

I really wanted to match up with one of the people who qualified just to see if I was actually playing good lol. My closest game was 12 points in a 4th quarter comeback. Rest were 20 or more point blow outs and only played one diamond/PD team.

What was your team ovr? 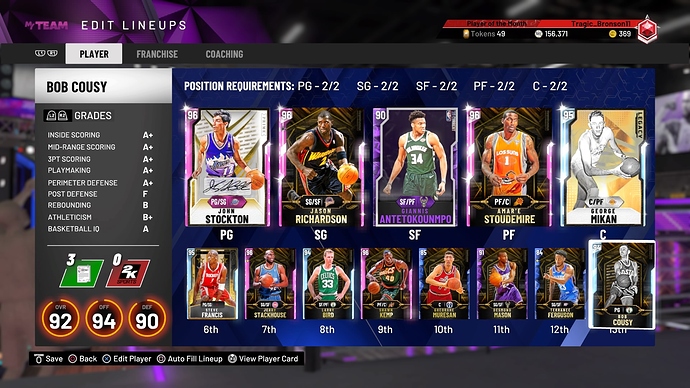 I only played a guy that finished domination and that was my very last game. I was thinking maybe because the sapphires but I legit used T-Ferg and muersan for match ups lol. Cause I was gonna run Redd but went with Ferg cause he’s better on defense.

Haven’t gotten mine yet ps4

Any updates on his evo stats and badges?

I wrote to 2k support and they said that if you’re from the state/country that is not eligible for the tournament, you won’t get this card.

I played and beat he guy who got 9th or 10th right before the qualifier. I stopped playing once I got stalled and didnt force enough rage quits

I just gotta refine my strategy

He’s out on Xbox I got his sapphire. 20 points and 10 assists to become ruby.

Pick pocket is his only defensive badge so you can forget about using this card competitively online.

He gets almost every offensive badge except for the three most important ones: quick draw, deadeye, range extender