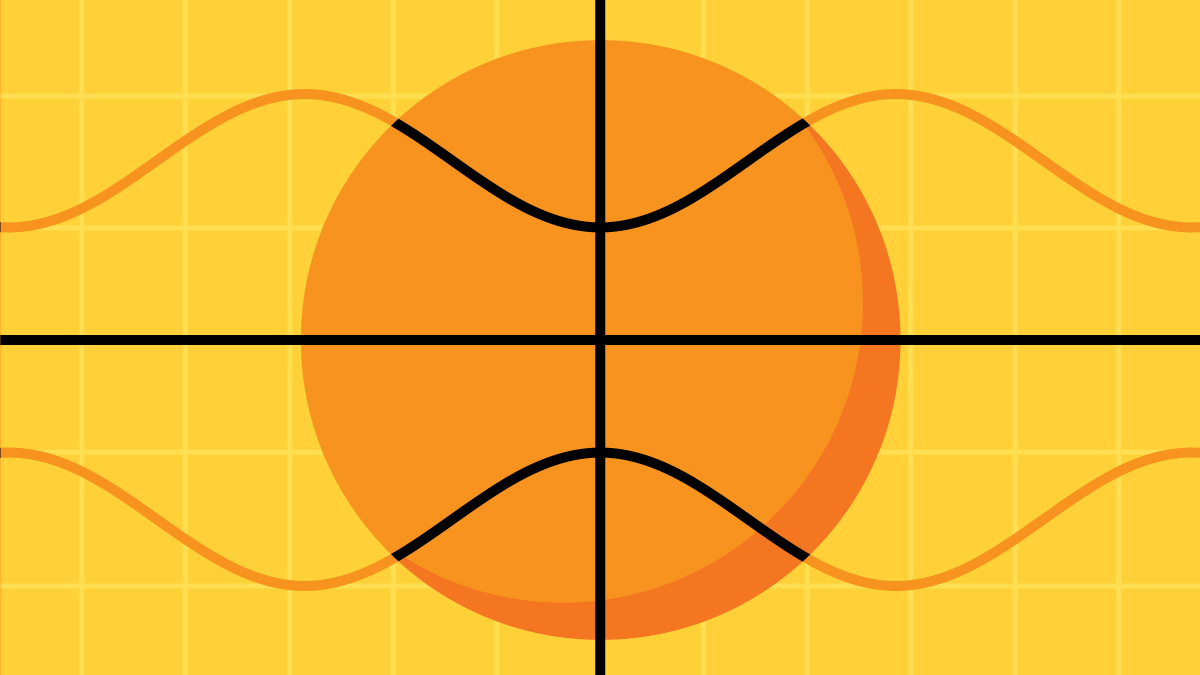 FiveThirtyEight’s NBA forecast projects the winner of each game and predicts each team's chances of advancing to the playoffs and winning the NBA finals. 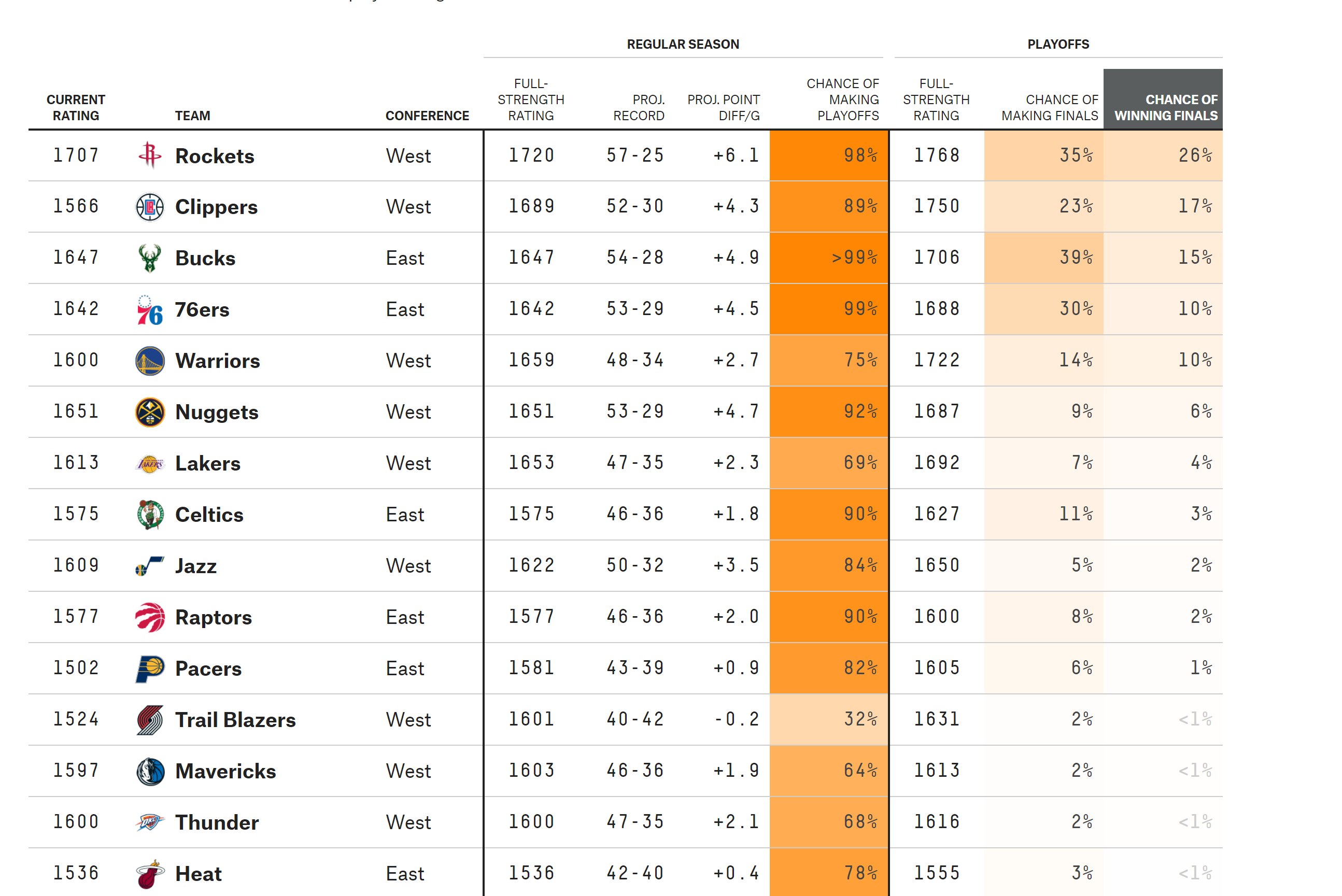 I disagree with a lot of that chart

Why do the thunder and Mavs have 2x the % odds of making the playoffs?

So from what I gather 538 expects a Rockets Bucks finals and they think a full strength Rockets squad is a full 33 points better than the next highest team’s full strength rating. That being a fully healthy Clippers team.

538 is very good at analyzing data and pouring through statistics, but as we all know, the regular season is completely different from the playoffs, which makes some of that data irrelevant for playoff analysis. I could see Houston having the most wins in the regular season, but I see no way they are the most likely team to win the title.

That’s what I was thinking too. I could see Houston winning 60 games and losing in the second round to the Clippers or Lakers.

They just look at the numbers and make an algorythm which never turns out to be right.
But of course as soon as the regular season is over, they remove their predictions from the previous season so people can forget about them missing the mark by a huge margin on a lot of teams.

According to them Colin Sexton and Kevin Knox had the worst seasons since the ABA/NBA merger.

Don’t get too stoked on demarre Carroll. But with that being said spurs always overlooked. I like their team. I like Forbes

Demarre is great for 15, maybe 20min rotation. at PF as a 3-D guy.
Forbes should be an inspiration to everyone. Made it undrafted.
He’ll be in a league for a long time. Redick type of player. An amazing shooter, just needs the freedom to let it fly.

Btw, I’m not saying that Spurs are a guaranteed 50-55wins team, but 39 is just disrespectful.
Same goes for 40 wins Blazers and even 46 wins Raptors.
Raptors are still superior to everyone in the East except for Sixers and Bucks.

Clips have the best team to take down the Lakers. Let’s be honest

Both teams have holes against each other

I know it’s impossible for me to not sound biased but H2H in a series I really wouldn’t be that worried. The Clippers would absolutely have to shoot over 50% for the series because we’re straight up too big for them. They will never win the rebounding advantage against us.

You sound a little too overconfident. I think the Clips are going to wreck the Lakers.

Lakers have way better big man rotation and rebounding. But out of all those bigs, noone is capable of exploiting the leck of height on the Clippers except for AD. Don’t expect Javale and Dwight to catch lobs over Trez, Kawhi or J. Green. Sure rebounding will be an advantage.

Clippers have way better shooting, perimeter defense is not even close.
Lakers will also struggle with perimeter creation because not a single player on that roster except for Lebron is a proven pnr ballhandler threat who can collaps the defense and make them pay if they sag off. (Please don’t mention Rondo, even most Lakers fans know he’s trash.) Not a single proven shooter in big game situations (except for Danny, who’s also inconsistent) and questionable rotation options on perimeter positions.

Assuming both teams are healthy, the only way Lakers win is if both Lebron and AD deliver some ridiculous numbers.
Kawhi and Lebron are on around the same level, AD is better than PG, but most of Lakers rotation wouldn’t even be on the Clippers roster.
Just look at Clippers depth.
Lou-Shamet-Harkless-J.Green-Trez (but they’ll obviously stagger minutes and always have one of Kawhi/PG on the floor, much like the Lakers with Lebron/AD).
That second unit has probably the best bench duo in the league, a great young shooter in Shamer and two very good 3-D guys.

Not to mention the fact that Clippers already have an amazing chemistry (with Kawhi and PG being relatively easy to include in every system), while the Lakers have a completely new team and coaching staff.

Clipps will get a big by the trade deadline. Mark my words. That team is going all in.

I think you’re overrating the bench defensively a little bit. Very good scoring bench, that’s about where it ends for them in advantages there. The Clips starters are certainly scary defensively, no doubt about it. Great offense beats great defense. I feel as though we can simply chuck up shots to the rim and JaVale, Dwight, and AD will be giving us 2nd and 3rd chances nearly at will. I do think the Clips are capable of getting hot but as I said, in a series, they would have to shoot over 50% at least because we will have a much higher volume of shots. The only question I have for the Lakers is defensively. I like our interior, concerned about the perimeter. But I’d rather have that problem than opposite one that the Clips do. They’re all perimeter with no interior. I also have great faith, being native SoCal guy, that the Clippers will do what the Clippers have always done. Something will go wrong. Because they’re the Clippers.